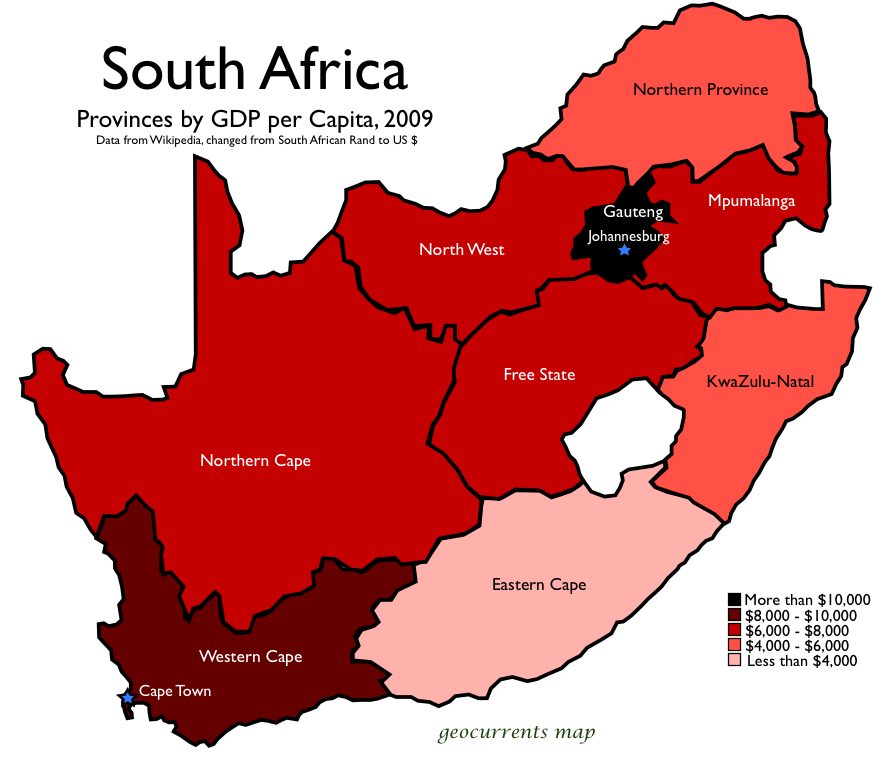 According to the Gini coefficient, as well as other inequality measurements, South Africa ranks as one of the most unequal countries in the world. Of course, measuring inequality is multidimensional, which particularly applies to South Africa. In discussions of South Africa, severe economic disparities are often highlighted. Much of the country’s inequality stems from apartheid’s effect on different races, but other factors also play important roles.

Three basic forms of geographic inequalities outlined in a previous post also exist in South Africa, namely: regional disparities, a rural-urban divide, and an urban underclass. As can be seen from the map at the top, significant differences mark off South Africa’s regions. The poorer provinces tend to be along the southeastern coast and in the north, whereas the Johannesburg region and the southwest tend to be wealthier (this is also reflected in the map below). The most striking regional disparity is that between the relatively prosperous Western Cape province (which includes Cape Town) and the impoverished Eastern Cape province. This contrast encourages substantial internal migration towards the economic opportunity in Cape Town and away from the poverty of the Eastern Cape. 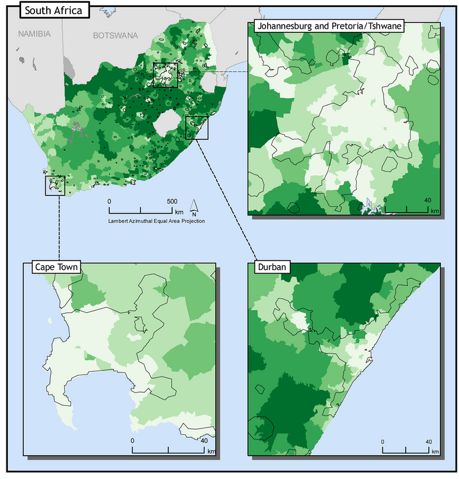 The maps to the left show the “headcount index,” which measures the proportion of the population living below the poverty line; darker shades of green signify higher levels of impoverishment. As can be clearly seen in the maps, urban centers have relatively few people below the welfare line, especially as compared with rural areas. The rural-urban divide is also detectable on the provincial map at the top, as the two most economically important cities, Johannesburg and Cape Town, are in the two wealthiest regions.

South Africa exemplifies economic differences within urban areas, as it contains some of the most unequal cities in the world. For example, in Cape Town, most migrants from the Eastern Cape live in segregated neighborhoods, separate from the professional areas in central Cape Town. All of these areas, however, are part of one city. 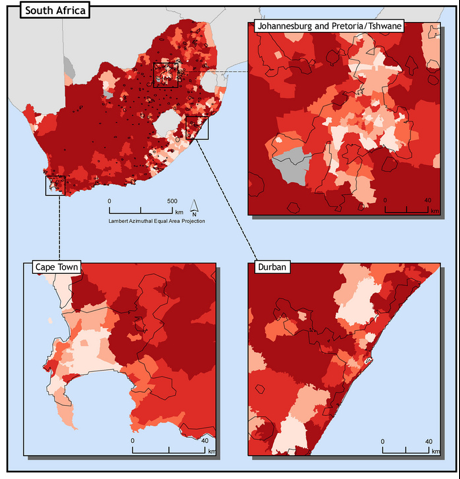 As can be seen in the maps of “generalized entropy” of inequality (where darker red indicates more unequal conditions), many neighborhoods in the centers of the cities are relatively equal. However, the neighborhoods are very segregated and tend to be equally wealthy or impoverished, but the map does not reflect average income levels

Inequality in South Africa is highly correlated with race. The system of apartheid, instituted from 1948-1994, determined economic possibilities and expectations based on race, contributing deeply to the unequal society that exists today. However, as the book Race, Class, and Inequality in South Africa* shows, apartheid did not have only the effect of increasing general inequality. For example, during early apartheid, the government was able to successfully decrease intra-race disparities. Furthermore, the overall levels of inequality remained fairly consistent, even through apartheid.

The National Party instituted apartheid in South Africa starting in 1948. It codified laws mandating racial categorization and exclusion. In particular, all non-whites were excluded not only from the political system, but also from most respectable jobs and good education. Specifically, apartheid aimed to physically separate the races, which was difficult to carry out in practice. Furthermore, the apartheid government concerned itself greatly with the welfare of the white population, hoping to improve the standing of poor whites As a result, poor people of European background greatly benefited from apartheid, as they were able to move into higher classes, bypassing well-educated non-whites. 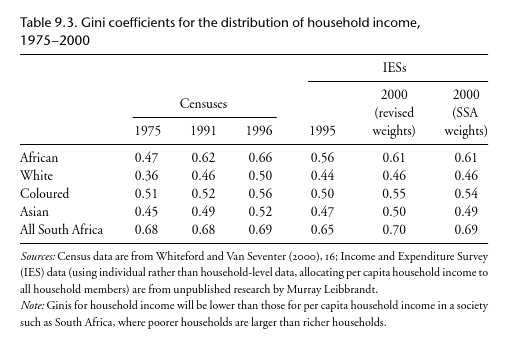 As can be seen in the table to the left (taken from Race, Class, and Inequality in South Africa), the Gini coefficient for the white population in 1975 stood at a relatively low .36, signifying the success of the apartheid government in bolstering the position of the poorer members of the white community. An essential component of this program was the reservation of well-paying jobs for the white population. Furthermore, when taking into account welfare expenditures and educational opportunities, the white population actually had greater equality than the Gini index shows.

Of course, this leveling of the economic differences within the white population was dependent on the widening gap between white South Africans and everyone else, especially the black Africans. Because the apartheid government restricted the professions that blacks could choose, blacks were basically limited to lower-level jobs.  In fact, this upper limit also facilitated an increase in equality within the black population, as even the well-educated blacks could not find well-paying jobs. 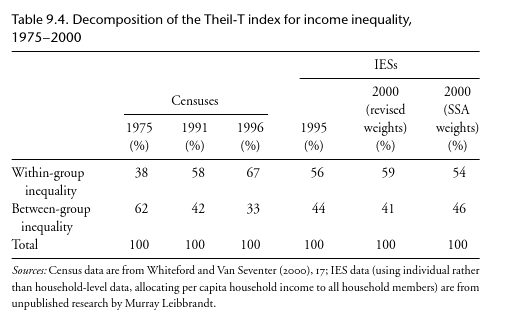 After 1975, the tendency toward increasing intra-racial equality reversed. As can been seen in the table to the right (also from Race, Class, and Inequality in South Africa), recent decades have seen a dramatic increase in inequality within racial groups. In the mid 1970s, the apartheid regime began to loosen its restrictions, allowing some educated non-whites to take higher-level jobs. Also important was the shifting labor market. Jobs requiring little education, particularly in mining, began to diminish after 1975. Without jobs or a solid education to use in the evolving labor force, many non-whites were left without work. These factors, among others, allowed for the increase of inequality within races, even as overall disparities in South Africa remained similar to what they had been.

With the end of apartheid in 1994, the chances for mobility increased. As a result, levels of inequality within all racial groups are slowly beginning to reflect the national average. Indeed, the end of apartheid has given many educated non-whites the opportunity (through dismantling apartheid laws) and assistance (through affirmative action) to obtain professional jobs. However, the vast majority of the black population still suffers severely from lack of marketable skills. Such discrepancies will continue to be felt in the next generation, as levels of education vary tremendously among social classes. 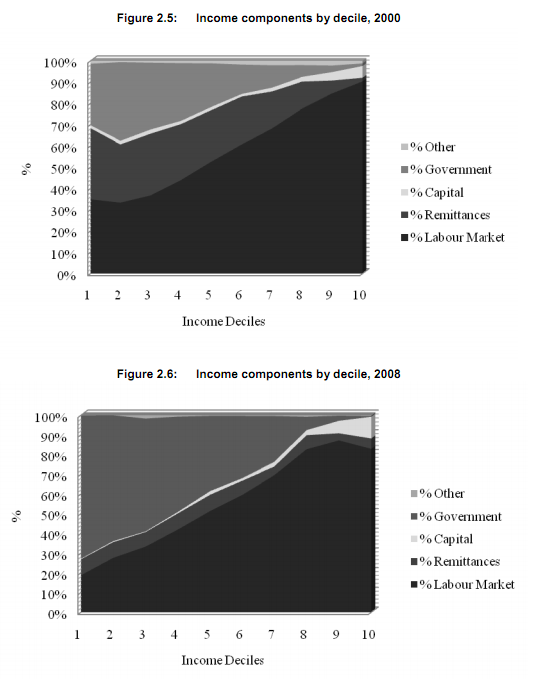 One of the main post-apartheid changes to income distribution has come about through governmental redistribution of income through a progressive tax system, along with the creation of social programs to aid the poor.  As the graphs demonstrate, the South African government is continuing to expand its role as a primary income source for much of the country’s impoverished population. Indeed, when government transfers are taken into account, the Gini index of South Africa is significantly reduced. As Race, Class, and Inequality in South Africa states, the Gini coefficient drops to about 0.50 when taxes and cash transfers are taken into account, and are reduced even further, to about 0.44 (a figure similar to that of the United States), when public social spending is added.

As much as the current South African government has been active in promoting income redistribution, the success of the earlier apartheid regime in promoting prosperity and equality among whites has intertwined socioeconomic status and race. In particular, the apartheid government successfully provided an excellent education for the white population, which enabled many whites to retain professional jobs even after the end of mandated segregation. The white population, as well as the newly wealthy non-white population, utilized their economic position to send their children to high-quality schools. As a result, highly unequal levels of education will continue to be reflected by an extremely varied pattern of income distribution.