Hot, Caffeinated, and Expanding: The Global Geography of Coffee, Tea, and Yerba Mate 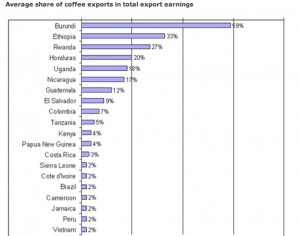 It is difficult to exaggerate the importance of the global trade in coffee and tea. Among commodities, the $80+ billion international coffee market is sometimes said to trail only that of oil. Coffee is an essential source of revenue for many countries, with Burundi making more than half of its export earnings from the crop, even though it does not count among the world’s top twenty producers. By weight and value, the international coffee trade surpasses that of tea, but tea is still the more widely consumed beverage. According to the Wikipedia, “Tea is the most popular manufactured drink in the world in terms of consumption. Its consumption equals all other manufactured drinks in the world – including coffee, chocolate, soft drinks, and alcohol – put together.”

Economic historians emphasize the crucial roles played by coffee and tea. The early modern European and American tea trade with China was large enough to be of political as well as economic significance, as reflected to this day in “tea party” slogans. Seventeenth century coffee houses in London and Amsterdam were not merely drink dispensers, but also incubators of the stock market and the insurance industry; the original Lloyd’s of London was a coffee house. As historian Wolfgang Schivelbusch relates in his engaging Tastes of Paradise: A Social History of Spices, Stimulants, and Intoxicants, the “sober drink” of coffee was widely linked to Protestant rectitude and frugal business habits. Although both coffee and tea are still frowned upon by many and prohibited by a few groups, both drinks seem to have generally healthful effects. Recent studies led Seeking Alpha to half-jestingly refer to “coffee stocks as a healthcare investment.” In historical terms, the main benefits of such beverages probably stemmed from the fact that they demanded the boiling of water, reducing microbial contamination. 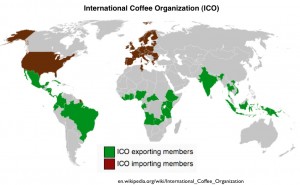 The geography of global coffee and tea production shows both expected and surprising patterns. As is often noted, coffee is a strictly tropical crop that is consumed largely in the temperate belt, which is one reason why it figures so prominently in international trade statistics. Such a north/south disparity is starkly reflected in the map of the International Coffee Organization, a U.N.-sponsored  association that collects data and seeks to enhance trade. The fact that most exporting countries are relatively poor whereas the main importers are relatively wealthy is cited extensively by proponents of “fair trade” coffee, those who seek to ensure that small-scale cultivators receive adequate compensation for their work. 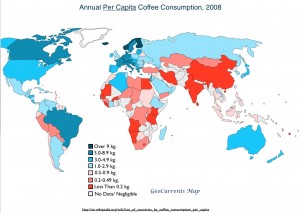 The disparity between coffee growing and coffee drinking countries appears less pronounced on a map of per capita consumption. Here the main patterns pertain to world regions: coffee use is high through most of the Americas and especially in Europe (with a few notable exceptions), low in sub-Saharan Africa and throughout mainland South, East, and Southeast Asia, and highly variable in the greater Middle East. Within the coffee-drinking zone, Nordic countries stand out, with Finland’s 12+ kilograms per person per year almost meriting a category of its own. It is true that many coffee-exporting countries are not particularly keen on the drink, although Brazil, which alone produces a third of all internationally traded coffee, imbibes fairly heavily; Brazilians drink more coffee, on average, than residents of the United States. Several others important producers, such as Colombia, Venezuela, and Ethiopia, exhibit moderate levels of consumption, whereas low levels of coffee drinking characterize such major exporters as Vietnam, Indonesia, and Peru.

The geography of coffee has changed greatly since the early modern era. Several places that were once redolent of coffee now drink little. Yemen was world’s first major coffee exporter, with one of its ports, Mocha, giving its name to a particular coffee preparation. Today qat-obsessed Yemen has little use for the drink. Indonesia is still a major exporter, but consumption remains low even on the island of Java, which has lent its name to the beverage more generally. ‘Turkish coffee” is famous, as once were the coffee houses of Istanbul, but Turkey today consumes little of the black beverage, much preferring tea. Ethiopia, coffee’s homeland, does both export and imbibe substantial quantities, but trouble lurks; according to a recent report, “Ethiopia’s coffee export continues to plummet due to chaotic government controls and enforcement of bad policies.”

Coffee consumption is generally quite low in Asia, with South Korea and especially Japan forming exceptions. But coffee producers are excited by prospects for growth in the Asian market, particularly that of China. Although the average Chinese person drinks only 5 cups a year, the figure in Shanghai is now over 20, and consumption is growing quickly as Starbucks and other chains proliferate. The biggest growth in the coffee market, however, has occurred in the Gulf States; according to a recent report, “The UAE has been the fastest growing market by volume for coffee in the world with coffee volume sales expected to register an 80 per cent growth from 2009-2014, or a compound annual growth rate (CAGR) of more than 12 per cent year on year over the same period.” 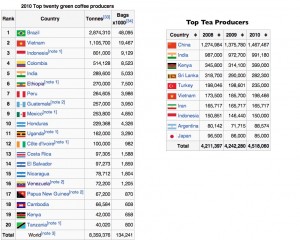 On the production side of the coffee ledger, the biggest change over the past two decades has been the rise of Vietnam, now the second largest producer by a healthy margin. The rise of Vietnamese coffee has often been described as economically destabilizing, generating distress in several poor, coffee-dependent countries. As can be seen on the Wikipedia map below, Vietnam competes in the robusta coffee market, which is otherwise heavily concentrated in Africa. 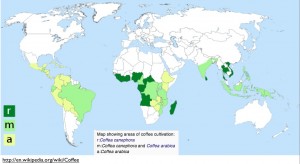 The distinction between arabica and robusta coffee is essential. Instead of being different varieties of the same plant, arabica and robusta are actually distinct species: Coffea arabica and Coffea canephora. The much more valuable arabica is differentiated into a number of named cultivars, each with distinctive characteristics. Uncelebrated robusta is valued instead for its “robust” nature, as it is resistant to a number of diseases and tolerates relatively high temperatures (arabica thrives only at moderately high elevations with equable climates). Cheaper robusta coffee is usually consigned to low-grade blends and the instant beverage market, where its high caffeine content can be advantageous. One “variety” of robusta, however, is the word’s most valuable form of coffee by a huge margin. Kopi luwak, or “civit coffee,” generally sells for $100 to $600 per pound, and can supposedly fetch as much as $6,600 per kilogram. Produced mainly in Indonesia and Vietnam, kopi luwak undergoes a unique form of biological processing. As the Wikipedia describes it:

[Kopi luwak] is made from the beans of coffee berries which have been eaten by the Asian Palm Civet (Paradoxurus hermaphroditus) and other related civets, then passed through its digestive tract. A civet eats the berries for their fleshy pulp. [T]he toddy cats’ proteolytic enzymes seep into the beans, making shorter peptides and more free amino acids. Passing through a civet’s intestines the beans are then defecated, keeping their shape. After gathering, thorough washing, sun drying, light roasting and brewing, these beans yield an aromatic coffee with much less bitterness.

Efforts are now underway to produce synthetic enzymes that that can generate the same characteristics without recourse to the digestive systems of civets. 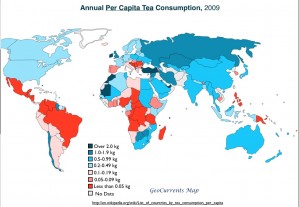 The global map of tea consumption yields some interesting comparisons with that of coffee. Here Latin America joins equatorial Africa in the low-consumption zone, while Europe is decidedly mixed. Russia and the greater Middle East are at the top, and Asia is a step below. A number of countries that quaff tea in copiously quantities consume little coffee, including Iran, Turkey, and India. To a lesser extent, the same can be said of Britain and Russia. The Republic of Ireland, intriguingly, consumes more tea on a per capita basis than the UK and more coffee as well. The Middle Eastern focus of tea drinking is perhaps surprising; the United Arab Emirates takes the first slot easily, followed by Morocco, and—after Ireland—Mauretania and Turkey. Through much of the region, tea consumption, like that of coffee, has been growing quickly in recent years.

Although most Middle Eastern countries are by necessity tea importers, Iran and especially Turkey are also major producers. Both owe their tea-growing prowess to the limited presence of humid subtropical climates along the southern shores of the Caspian and Black seas, respectively. Given its relatively large population, Turkey has a huge tea market. As noted in a Market Research World article: 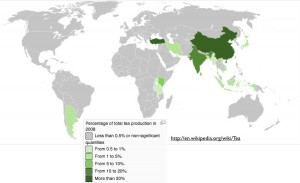 The British proclivity for tea is well know, and a number of former British colonies have elevated consumption figures, including Botswana, Zimbabwe, and Guyana. The only major tea-drinking country in Latin American is Chile, which is said to have acquired the habit from British settlers in the 19th century; as is the case in Britain, “tea time,” or onces, in Chile entails a light meal served alongside the drink. In Argentina, which was economically closely linked to Britain in the late 1800s and early 1900s, tea cultivation is much more widespread than tea consumption. Argentina is the world’s ninth leading tea producer, besting even Japan. Most Argentina’s tea is destined for export, usually for blending purposes; much goes to the U.S. for the iced tea market.

Argentina drinks little tea and only moderate amounts of coffee, yet it is nonetheless one of the world’s top consumers of hot, caffeinated beverages. Along with several of its neighbors, Argentina favors yerba mate, a tea-like infusion made from the leaves of a holly tree, llex paraguariensis. Mate drinking was evidently widespread among the indigenous Guaraní and Tupi peoples in pre-Columbian times; Jesuit missionaries, who ran Paraguay as a theocracy for many years, are generally credited with domesticating the plant. Today, Brazil is the largest producer, followed by Argentina and Paraguay. Uruguay, however, is the largest consumer in per capita terms. In Brazil, mate drinking is concentrated in the far south.

Although yerba mate was long limited to southern South America, it has been spreading to other markets in recent years. Exports to the United States are quickly growing, and the drink is now relatively well known in northwestern cities. A bigger market, however, has emerged in the Middle East. Many Lebanese and Syrian immigrants and sojourners in Argentina and environs later returned home, bringing the brew with them. Some 60 per cent of mate exports are currently destined for the eastern Mediterranean, a region noted for its fondness for hot, caffeinated beverages.

The health effects of yerba mate are much debated. Advocates view it as healthful, noting that it contains vitamins, antioxidants, and anti-carcinogens. Heavy use, however, has been correlated with increased incidence of esophageal cancer, which is generally thought to result from the traditionally method of consumption: sipping the liquid piping hot through a metal straw out of a heat-retaining gourd. Carcinogenic compounds have also been found in some packaged mate products, but these seem to originate from the smoke used to dry the leaves. It could be worse; I have heard credible stories of tea leaves being dried by truck exhaust in China. At any rate, unsmoked mate preparations are now available.