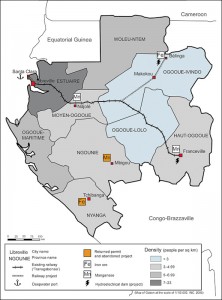 Sparsely populated Gabon (population 1.5 million) stands out on the map of Africa for its relatively high levels of economic output (with a per capita GDP of $14,400* in 2008) and social welfare. Gabon’s development has been underwritten primarily by oil exports, which account for roughly fifty percent of its GDP and eighty percent of its exports, but oil production is down and reserves are diminishing. Gabonese leaders have therefore set their sights on the country’s other mineral resources. Iron ore in particular beckons. The Belinga deposit, most of which is located in Gabon, contains an estimate one billion tons of iron ore, and thus forms one of the largest untapped reserves in the world.

Exploiting the remote Belinga reserves, however, is not an easy proposition. The government of Gabon has determined that it will cost some three billion Euros to put in a railroad, build a deepwater port, and construct a hydroelectric dam for power. Not surprisingly, Gabon turned to China for financing and technical expertise. An initial 2006 deal with a Chinese mining consortium was renegotiated in 2008, and in 2010 the project was handed over to the state-owned China National Machinery Import and Export Corporation. Progress, however, has been slow: Chinese managers complain about obstruction from the government, and public hostility has been mounting. 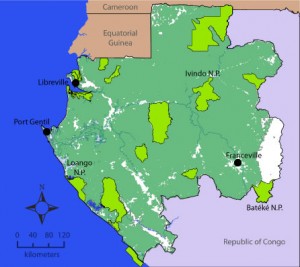 Unsatisfied with the current arrangement, Gabon is again in the process of renegotiating with its Chinese partner. Rumor has it, however, that it would like to drop China altogether and instead turn the project over to a major international mining firm, most likely the Anglo-Australian leviathan BHP Billiton. Brazil’s Vale and France’s Eramet are also mentioned as possibilities, but it is significant that Gabon’s President Ali Bongo Ondimba visited BHP Billiton iron-ore facilities in Australia this April. A number of obstacles, however, remain. According to the Financial Times, investors are concerned that Gabon’s pending changes to its mining code will “include a supertax on profits, abolish certain fiscal incentives, and demand new environmental guarantees.”

Environmental concerns are significant. In particular, the proposed dam that would supply power to the mine would inundate part of Ivindo National Park, a preserve famous for Kongou Falls, where the Ivindo River drops fifty-six meters in a three-kilometer-wide cataract. Gabonese environmental activist Marc Ona Essangui has gained a certain degree of global fame—as well as the Goldman Prize—for his campaign to protect Ivindo.

Oil and iron ore are by no means the only valuable mineral resources in Gabon. As the Financial Times article cited above notes:

Gabon is already the world’s second-largest producer of manganese dioxide and aims to overtake South Africa as the largest by 2015. It has reserves of gold, uranium, diamonds and the capacity to produce 15 per cent of the world’s niobium, a rare earth used in steel alloys.

In China, meanwhile, iron ore prices have dropped significantly, no doubt decreasing Chinese interest in Gabon’s reserves. As reported in a recent article in SteelGuru:

MOUNTAINS of iron ore at Chinese ports used to be a sign of a booming Australian resources sector, but it has turned into a source of headaches for Chinese commodity traders who are struggling to find buyers for their stockpiles of red dirt.

(For an excellent overview of the China-Belinga connection written last year, see this EchoGeo article, which is the source of the first map posted above.)