A similar but less noticed transformation in the asparagus market has occurred more recently. Fresh asparagus was once a springtime treat, but it is now readily available in all seasons, thanks mostly to exports from coastal Peru. In this case, the rise of production in the Southern Hemisphere has deeply impacted growers in the north, as Peruvian farmers have figured out how to take advantage of their unusual climate to produce fresh asparagus all year round. 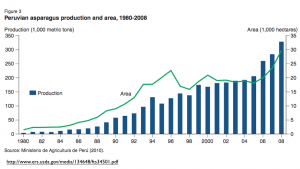 In the United States and Europe, off-season asparagus is obtained almost entirely from Peru, which is now the world’s second largest producer of the crop, trailing only China. (China exports canned and frozen asparagus, but little of the fresh product). Although asparagus is most widely celebrated in Germany and neighboring countries, Peru currently out-produces Germany by more than three-fold (335,209 tonnes vs. 92,404 tonnes). As asparagus is almost unknown in Peruvian cooking, virtually the entire crop is exported. Many U.S. growers have been unable to compete with those of Peru, resulting in plummeting production in California and Washington, the two leading U.S. asparagus producers. Peru exports both green asparagus, favored in the United States, and white asparagus, which is more popular in Europe. (The two varieties come from the same plant; to produce white asparagus, the stalks have to be etiolated by exclusion from light.) 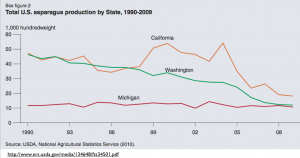 Asparagus is a perennial plant that requires a period of dormancy if it is to send out the new shoots that are so widely relished. In temperate latitudes, the dormant period comes in the winter and is brought on by cold. In the coastal river valleys of Peru, where frost is unknown and temperatures vary relatively little from season to season, dormancy is instead induced by the absence of water. As it almost never rains in the coastal zone of central and southern Peru (Lima’s average annual precipitation is a minuscule 13 mm [0.5 inches]), all one has to do is withhold irrigation, which relies on perennial streams coursing down from the Andes Mountains to the rainless coast. Taking advantage of this situation, Peruvian asparagus farmers now rotate their irrigation schedules so that they can harvest year-round. In addition to this advantage, they also enjoy low labor costs as well as remarkably consistent and mild climate, moderated by the cool waters of the Humboldt Current. Also important is the fact that the Peruvian government favors export-oriented commercial agriculture. Investments in shipping technologies have also been important. As Carrier, a leading firm in container refrigeration, reports:

To help improve the quality and value of Peru’s exports, shipping lines are getting more sophisticated, employing more refrigeration specialists and making greater use of technologies such as Carrier’s EverFresh® controlled-atmosphere system and the eAutoFresh™ automatic fresh air ventilation system… . Supporting them, as well as the grower-producers, Carrier has provided container refrigeration educational sessions in Peru. … [T]he producers are showing a greater interest than in the past to better understand the shipping science and which technologies are best for which commodities, depending on various factors, such as specific produce respiration rates, tolerance to carbon dioxide, ethylene sensitivity and distance from destination.

By 2010, experts were warning that Peruvian asparagus exports had probably reached a plateau and would likely begin to decline. A small native midge was beginning to infest the fields, and competition from Mexico was a growing concern. In June of 2013 year, however, Fresh Plaza announced that such concerns had “dissipated” as Peruvian exports continued to surge. Fears about the possible decline of the industry, however, have encouraged Peruvian export-oriented farmers to diversify their offerings. 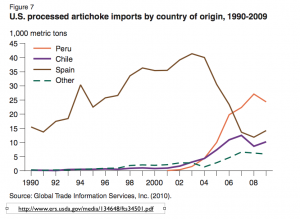 Peru’s unique coastal climate has helped spur such diversification efforts. The cool, often fog-shrouded coast provides a perfect environment for artichokes, another perennial vegetable. Peru is now the world’s third largest artichoke producer, trailing only Italy and Spain, and handily out-producing eighth-place United States (134,244 vs. 53,890 tonnes). Thus far, Peruvian artichoke exports have focused on canned goods rather than fresh produce, and have thus not harmed U.S. production. The United States was once a significant canner of artichoke hearts, but competition with Spain undermined domestic production in the late 20th century. But as Spain’s costs rose, Peru and Chile rapidly gained market share, as can be seen in the graph posted here. (The graph is derived, like the other images posted here, from a detailed U.S. Department of Agriculture report written by Birgit Meade, Katharine Baldwin, and Linda Calvin.) 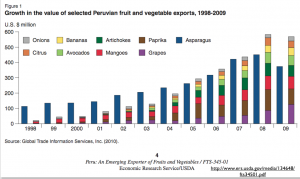 The coastal farming districts of Peru are able to produce a large array of both temperate and tropical crops, due in part to the presence of distinct microclimates structured by the proximity to the ocean. After asparagus proved lucrative in the 1990s, other vegetables and fruits were added to the mix. By 2005, eight other crops collectively earned more money than asparagus: table grapes, paprika peppers, mangoes, artichokes, avocados, bananas, citrus, and onions. Although asparagus, artichokes, and especially onions are shipped mainly to the United States, the European Union is the main recipient of most Peruvian fruit and vegetable exports. East Asia also imports a significant share of Peru’s grapes and bananas. 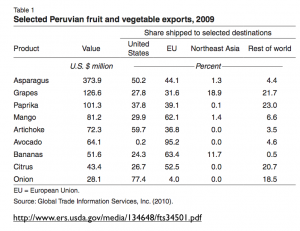 Peruvian growers are currently eying other crops. In 2011, pomegranate exports from Peru reportedly grew by 197 percent, aided by the Peruvian Agri Institute’s “specialized training program for pomegranate growers.” Blueberries may be even more promising. The world blueberry market is currently growing at a 20 percent annual rate, driven mainly by enthusiasm over the fruit’s antioxidant properties. Although pomegranates can compete with blueberries in terms of anti-oxidants, the latter are much cheaper and also easier to process, as the whole berry is used, unlike the case with pomegranates, in which the seeds have to be separated from the rind and pith. Concerted research has been necessary to make blueberry growing feasible in Peru’s commercial agricultural heartland. As FreshFruitPortal notes:

In Peru, thanks to access to modern genetics, we can overcome the myth that blueberries can only be grown in the mountains. It is now clear that competitive blueberry plantations can be developed on the coast. A number of factors contribute to a strong offering: light soil, good quality water, a stable climate, absence of rain during harvest, available workforce and logistical facilities.

Despite low agricultural wages, the fruit and vegetable export boom has brought a measure of prosperity to Peru’s commercial farming districts. According to a 2012 PRI report, the Ica Valley, center of the asparagus industry, is now a “boomtown” where:

Locals say unemployment is near zero. Poverty has been cut in half. And there are unheard of amenities. “There are now movie theaters as of only four or five years ago,” says Cecilia Blume. “And another thing that’s super important to me is the social revolution. There isn’t childhood malnutrition. Because in Ica, there’s work now for women – in agricultural packing.

The same article, however, notes that water is being withdrawn from the local aquifer faster than it is being recharged. Similar problems are found in Peru’s other agriculturally productive desert valleys, leading to concerns about the sustainability of the export boom. In the Ica Valley, local farmers have been lobbying the government to build dams in the mountains to store excess runoff. “Super-high-tech drip irrigation systems designed by an Israeli expat” are also being installed.

Other problems also plague the asparagus export industry. Some activists are urging a boycott of Peruvian asparagus due to the severity of the water crisis, the fact that the exported produce is sprayed with methyl bromide, and the large carbon footprint entailed by air-shipping the precious cargo to the Northern Hemisphere. An informed post on these issues found at Asparagus-Lover.com, however, concludes by arguing that, “if we just stop buying Peruvian asparagus we will push this very poor population into an even worse situation.”

The next GeoCurrents post will focus on mapping the coastal agricultural districts of Peru through the use of Google Earth.