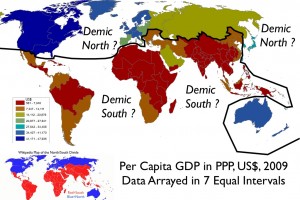 As has been argued previously on GeoCurrents, the commonplace notion that the world is starkly divided between a prosperous and powerful “global north” and an impoverished and underdeveloped “global south” (with Australia and New Zealand forming southern outposts of the north) receives little support from world maps of socio-economic development. As can be seen in the state-based map of per capita GDP (PPP) posted below, the so-called global south is a diverse zone, containing relatively wealthy as well as extremely poor countries. As a result, the south fails to cohere as a region; in terms of virtually all development indicators, a well-off southern country such Chile is much closer to such northern regions as southeastern Europe than it is to central Africa. Most socio-economic maps constructed in the demic framework are even less supportive of the notion of a fundamental latitudinal divide. As the demic map of per capita GDP posted below indicates, the real zone of poverty is focused in tropical Africa and the northern part of southern Asia, rather than in a hypothetical globe-spanning south. 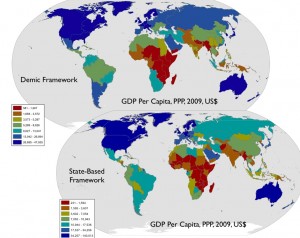 Such maps, however, do not tell the whole story. Statistical information can be mapped in many different ways depending on how the data are categorized. By playing with different modes of division, one can generate a diverse set of maps, some of which might uncover patterns that otherwise remain hidden. As it turns out, the database used in the Demic Atlas can indeed produce maps replicating the north-south global divide. Such a pattern is not pronounced, as it takes careful manipulation of the underlying information to expose it. Yet its presence is notable, and hence deserves consideration.

Most of the maps posted in GeoCurrents last week were based on the division of the data into quantiles. Quantiles break up a dataset to yield subsets of equal size; as the same number of units is slotted into each category on quantile maps, relatively well-balanced depictions generally result. In the Demic Atlas, seven such divisions were employed for most maps, as experimental evidence suggests that most people cannot readily differentiate more than seven values in a color spectrum. Although the seven-fold quantile design seems to be the most useful general vehicle for mapping global development, it is not without its problems. Most significantly, it under-represents the discrepancy between the poor and wealthy parts of the world. In absolute terms, the per capita GDP figures of areas placed in the middle categories on the quantile maps are closer to those of the countries on the low end of the spectrum than they are to those of the countries on the high end.

One alternative method of dividing data is that based on “equal intervals.” In this system, the value ranges of each category are of equal numerical scope, set at the same regular intervals regardless of how many units fall into each category. If, for example, the lowest figure in a five-category dataset is 1 and the highest is 100, the first category will cover the numerical range between 1 and 20, the second between 21 and 40, and so on. If most elements of the dataset are clustered in one part of the range, the resulting map may appear quite unbalanced, with several of its categories forming null sets, with no members. 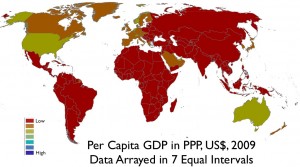 Due to such data clumping, depicting global per capita GDP in equal intervals in a state-based framework yields an uninstructive map. As can be seen in the image to the left, almost the entire world appears impoverished in a seven-fold equal-interval scheme, with most countries falling into the lowest category. Although unsuitable for general purposes, this map does illustrate one important aspect of the global distribution of wealth among polities: a small handful of small countries and dependencies are vastly wealthier than the rest, at least in terms of per capita GDP. Qatar in particular, with its small population and vast reserves of oil and natural gas, towers above most of the world’s richest countries, with a per capita GDP that the CIA regards as almost four times greater than that of the United States. As the detailed map of Europe and the greater Middle East shows, Qatar, Luxembourg, and Lichtenstein monopolize the high-end categories in such a portrayal. 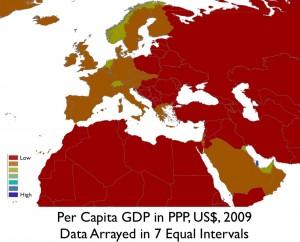 As the demic framework eliminates small countries by merging them with their neighbors, it allows much more effective equal-interval mapping. In the demic equal-interval depiction of per capita GDP (PPP) placed at the top of the post, large expanses of land fall into the upper categories, but even larger areas end up in the lowest grouping. The middle categories, in contrast, are sparsely occupied.

As a quick comparison with the small inset map indicates, the resulting categorization scheme conforms well with the conventional north/south global division. Whereas almost all regions to the south of the heavy black line fall into the bottom two categories (the only exceptions being Regions 19 [Arabian Peninsula] and 47 [Jiangsu and Shanghai]), none of the regions to the north of the line do. The line itself, moreover, falls almost exactly along the north/south division as it is conventionally mapped. The only differences here are the demic map’s placement of southeastern Europe and Israel in the global south and of Kazakhstan and Mongolia in the global north. 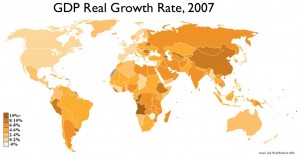 Although a north/south global split can be derived from the demic database, it would be unwise to read more into this division than is warranted. As explained above, the global south remains invisible in almost all other methods of mapping the data, whether in the state-based or the demic framework. More important, most of the north is currently exhibiting slow rates of economic growth, and has been for several years, whereas many southern countries, particularly China and India, are moving rapidly forward. If current trends continue, the north/south divide will vanish even on the equal-interval demic map within the coming decade.