Queensland has a reputation of being the most conservative state in Australia, especially in regard to social and racial issues. As such, it has been deemed Australia’s “Deep North,” in reference to the “Deep South” of the United States. Such attitudes, however, have changed significantly in recent years. A study from the 1990s concluded that there were no longer any “significant differences between Queenslanders and New South Wales residents.” Significantly, Queensland passed a same-sex civil union bill in late 2011. Such unions are now accepted across eastern Australia, but not in the west or the south of the country.

But if one digs a little deeper, a more complex picture emerges. Although the residents of the Brisbane area in southeastern Queensland, the state’s demographic core, are now relatively liberal on social issues, the same cannot be said for the people of central Queensland. As indicated on the first map posted here, a 2010 study showed that residents of central-eastern Queensland have the most pronounced anti-homosexual attitudes in Australia. 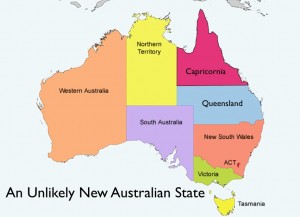 Intriguingly, central Queensland along with northern Queensland have long maintained separatist movements devoted to creating one or two new Australian states. In earlier times, the main complaints were distance from the state capital of Brisbane and neglect by the state government. Today, difference in political philosophy figure more prominently. One of the proposals for division would create a new state of Capricornia, depicted on the second map posted here.

The economy of central Queensland rests heavily on natural resources. The region contains Australia’s largest coal reserves, located in the Bowen Basin. This area is noted for its high-quality coking coal, vast quantities of which are exported annually. The business is currently expanding rapidly. According to the Wikipedia, “In mid 2011, evidence of a continuing mining boom was provided by state government figures which showed more than 50 mining projects are under consideration in the Bowen Basin.” Natural gas is also abundant in the region. 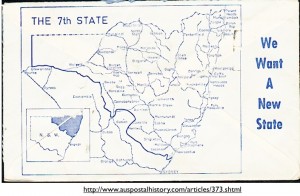 The “Capricornia movement” is by no means the only drive to create a new state in Australia. In recent years, a more organized movement has sought to carve out a state of “New England” from the northeastern portion of New South Wales. As the first map indicates, this area is also more socially conservative than the rest of the state in which it is located.