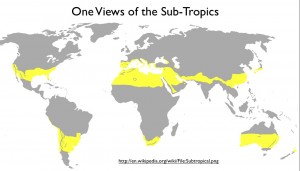 In 2010, Foreign Policy magazine asked Russian opposition leader and Sochi native Boris Nemtsov why he opposed the 2014 Winter Olympics in his hometown. Nemtsov’s reply was broad ranging. He decried the displacement of 5,000 people while warning that corruption and organized crime would devour most of the construction funds showered on the city. He began his critique, however, with Sochi’s climate:

“[Putin] has found one of the only places in Russia where there is no snow in the winter. He has decided to build these ice rinks in the warmest part of the warmest region. Sochi is subtropical. There is no tradition of skating or hockey there. In Sochi, we prefer football, and volleyball, and swimming. Other parts of Russia need ice palaces — we don’t.”

Sochi does indeed have a subtropical climate, with average winter temperatures well above freezing, complicating Olympic plans. As Nemtsov elaborates, most of the skating facilities are being built in the Imereti Valley, which is warmer than Sochi itself. Cooling, needless to say, will be expensive. The ski venue might seem to be even more of a problem, as Olympic-quality skiing requires natural snow in copious quantities. The snowy Caucasus Mountains, however, lie just to the northeast of Sochi.  The main skiing facilities at Krasnaya Polyana, thirty-seven miles (sixty kilometers) from the city center, will probably have adequate snow. 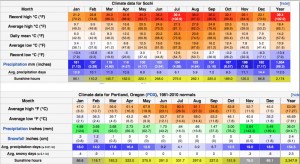 But while Sochi qualifies as subtropical by strict climatological criteria,* it can be misleading to characterize it as such, at least in the United States. If I were to use the term “subtropical” in class, my students would imagine Miami or perhaps Los Angeles at a stretch. Certainly those native to California’s Bay Area would never consider their winter-chilled homeland as “subtropical” in any sense. Yet the Bay Area is actually much warmer in winter than Sochi. In Palo Alto, the average February high temperature is 62°F (16°C), far exceeding Sochi’s 49.8°F (9.9°C). In terms of annual temperature range, Sochi is closely analogous to Portland, Oregon, as can be seen in the paired tables reproduced here. In the United States, the notion that Portland has a subtropical climate would seem quaint if not ludicrous.

From the Russian perspective, however, Sochi definitely is subtropical. If anything is mentioned about Sochi in the Russian press, it is generally its sub-tropicality—and for good reason, as it is essentially the only place in the country with a non-freezing winter. Climate evaluations turn out to be variable, relative to one’s personal experience. I once spent a summer in the Nunamiut (“Inland Eskimo”) village of Anaktuvuk Pass, Alaska, where the locals found their own summer climate delightfully temperate and that of the adjacent Yukon Valley oppressively hot. In Anaktuvuk Pass, July temperatures rarely exceed 50°F (10°C). Yet one day during my sojourn the winds died down, the sky cleared, and the temperature soared to a delightful 75°F (24°C)—or so I thought. The villagers were not pleased at all with the brutal heat.

The (US) Wikipedia article on Sochi describes its climate not only as subtropical, which is technically true if slightly misleading, but goes on to characterize it as being of the “Mediterranean–type”—which is simply incorrect. Mediterranean climates are characterized by dry summers, and those of Sochi are distinctly wet. True, Sochi gets a bit more rain in the winter than in the summer, but its average July precipitation of 4.9 inches (124 mm) is hardly meager. In most climate classification schemes, a Mediterranean climate cuts off at 30 to 40 millimeters (1.2-1.6 inches) of precipitation in the driest month. (Note that by such criteria, Portland Oregon is definitely Mediterranean, yet few Americans would place such a wet city in that category.)

Beyond ice-rink cooling costs, the Sochi Olympics faces a number of problems. The Circassian protests have already been discussed in previous posts, and issues surrounding organized crime and corruption are noted above. But according to Boris Nemtsov, the mire runs much deeper. In a 2011 television interview, he claimed that the total costs could exceed U.S. $30 billion—ten times the figure of the Vancouver Olympics. Nemtsov also highlights the cultural and environmental damage suffered by the city and its environs, as roads are pushed through nature reserves and old residences are demolished without replacement. Such disruptions, he claims, have already undermined the summer tourism industry, the lifeblood of the local economy. Construction, moreover, is running behind schedule, worrying Russian leaders. In mid-January 2012, “President Dmitry Medvedev … ordered the government to ensure facilities for Russia’s 2014 Winter Olympics were finished on time, in a rare official show of impatience with the sluggish progress.”

Sochi is not the only part of the Caucasus impacted by ambitious winter tourism designs. Russia plans to build major downhill ski resorts elsewhere. According to a January 14, 2013 article:

[T]he draft project of the tourism cluster in the south of Russia envisages the construction in 2011-2020 of five world-class mountain resorts in Lagonaki (Krasnodar Territory, the Republic of Adygea), Arkhyz (Karachaevo-Cherkessia), Elbrus-Bezengi (Kabardino-Balkaria), Mamison (Republic of North Ossetia-Alania), Matlas (Republic of Dagestan). The length of all the ski slopes will total nearly 900 km. 179 elevators will be installed. Hotels of various levels of comfort designed for 89,000 places will be constructed. … Each year the North Caucasian tourist cluster will accept 5-10 million tourists.

Such plans seem overly optimistic, as security concerns, inadequate infrastructure, and poor hotel management may make it difficult to attract many tourists. Some critics think that Russia would be much better off building additional winter sports facilities in the Khanty-Mansiysk area in the Ural Mountains of western Siberia. Khanty-Mansiysk, capital of the Khanty-Mansi Autonomous Okrug, boasts of its mountain skiing facilities and the fact that it has successfully hosted several world biathlon championship. It is also an oil-boom town located in the Russia’s richest administrative district. As such, it would seem to be a more reasonable place for winter resort development than the violence-plagued northern Caucasus.

(Many thanks to Asya Pereltsvaig for translating Boris Nemtsov’s interview.)