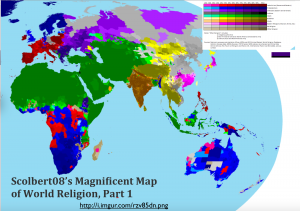 An astoundingly detailed map of world religion has recently been published by reddit user “scolbert08.” The map is much too large for me to post in its entirely on GeoCurrents, but one can find the full-resolution map both here and at the interesting website Brilliant Maps. The level of precision found on this map is truly remarkable; over much of the world it goes down to the level of third-order administrative divisions. The map certainly has a few problems, which I will address in subsequent posts. But so too do all world religion maps, due in part to the intrinsic complexities of religious affiliation. But overall, the map is a remarkable achievement, and both it and its author deserve far more recognition than they have received. The anonymity of the cartographer, however, does present some challenges here. 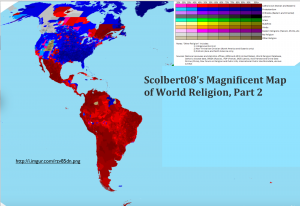 I get excited about maps that teach me interesting things about the word, and by this metric Scolbert08’s production scores high indeed. Let us begin by considering the map’s portrayal of Greece and the Balkan Peninsula. The map detail that I have posted here has some interesting features that I have long been aware of, such as the Roman Catholic zone in northern Albania, the Muslim area in northeastern Bulgaria (Turkish speaking), and the Muslim area in southwestern Bulgaria and some neighboring districts in northern Greece (that of the Pomaks, who speak Bulgarian). But the map also includes three features that were completely new to me. 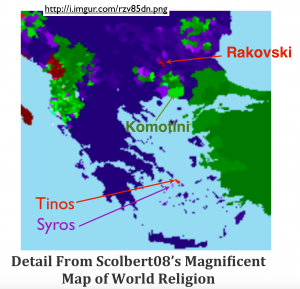 The first of these feature is the presence of a Roman Catholic plurality on the Greek island of Tinos, as well as a strong Catholic presence on some other islands in the Cyclades archipelago (some of these islands, such as Syros, are colored light purple on the map, indicating that Eastern Orthodoxy is the main faith but is embraced by only around half or less of the local population). As the Wikipedia describes the island of Syros:

As in the rest of Greece, Syros has Eastern Orthodox churches. … There is also an equal number of Roman Catholic churches on the island and some entirely Catholic villages; thus, it is one of the most significant places for Roman Catholicism in Greece. Syros is one of a few places where Catholics and Orthodox share a common date for Easter, which in Syros’ case, is the Orthodox date.

Another Wikipedia article, that on Roman Catholicism in Greece, explains the situation, which dates back to the period of Venetian and Genoese rule:

Indigenous Roman Catholic Greeks number about 50,000 and are a religious and not an ethnic minority. Most of them are either descendants of the Venetians and Genoese that ruled many Greek islands (in both the Aegean and Ionian seas) from the early 13th until the late 18th century, or descendants of the thousands of Bavarians that came to Greece in the 1830s as soldiers and civil administrators, accompanying King Otto. One very old but still common term to refer to them is Φράγκοι, or “Franks”, dating to the times of the Byzantine Empire, when medieval Greeks would use that term to describe all Catholics.

Another surprise for me is the Muslim plurality in Komotini in northeastern Greece. Most of the Muslims here are Turkish speakers. I had been under the impression that virtually all Turks were expelled from Greece in the 1920s. But as it turns out, Komotini was largely exempt. As explained by the Wikipedia:

The population [of Komotini] is quite multilingual for a city of its size and it is made up of local Greeks, Greek refugees from Asia Minor and East Thrace, Muslims of Turkish, Pomak and Romani origins, descendants of refugees who survived the Armenian Genocide, and recent refugees, including Pontic Greeks from north-eastern Anatolia and the regions of the former Soviet Union (mainly Georgia, Armenia, Russia and Kazakhstan).

The Muslim population of East Macedonia and Thrace dates to the Ottoman period, and unlike the Muslims of Macedonia and Epirus, was exempted from the 1922-23 Greek-Turkish population exchange following the Treaty of Lausanne

The most interesting surprise on the map, however, is the presence of a Roman Catholic population in the Bulgarian city and environs of Rakovski. This community was evidently composed of followers of the heterodox (or heretical, depending on one’s perspective), dualistic Paulician creed that once flourished in parts of the Byzantine Empire. The members of the final Paulician community eventually converted to Roman Catholicism rather than Eastern Orthodoxy, and in such a manner remained religiously distinctive from their neighbors. As explained in the Wikipedia:

Bulgarian Catholics live predominantly in the regions of Svishtov and Plovdiv and are mostly descendants of the heretical Christian sect of the Paulicians, which converted to Roman Catholicism in the 16th and 17th centuries. The largest Roman Catholic Bulgarian town is Rakovski in Plovdiv Province. ….

Nonetheless, Catholic missionaries renewed their interest in Bulgaria during the 16th century, after the Council of Trent, when they were aided by merchants from Dubrovnik on the Adriatic. In the next century, Vatican missionaries converted most of the Paulicians, the remainder of a once-numerous heretical Christian sect, to Catholicism. Many believed that conversion would bring aid from Western Europe in liberating Bulgaria from the Ottoman Empire.