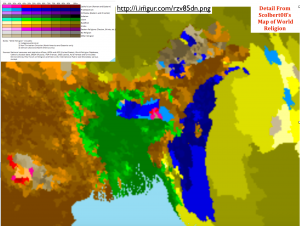 The strongly Christian areas of far eastern India stand out clearly on Scolbert08’s map. Protestantism, represented mostly by the Presbyterian and Baptist churches, dominates here, but the state of Meghalaya also has an area of Roman Catholic plurality. Most of India’s northeastern 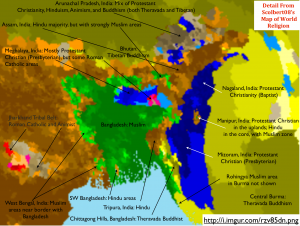 Christians are of tribal background, and hence were never incorporated into the Hindu world. Manipur, which has a Hindu plurality, forms a religious exception in this part of India. In the early modern period, Manipur was a strong Hindu kingdom, supported by a powerful cavalry. But Hinduism is prevalent only in the state’s central plain, which also has a small zone of Islam, whereas the uplands of Manipur are dominated by Protestant Christians. The state as a whole is 46 percent Hindu, 34 percent Christian, and 9 percent Muslim.

Arunachal Pradesh in the far northeast, which China claims as “South Tibet,” is strikingly heterogeneous in terms of religion, as it is in regard to language, with some 30 to 50 separate ethnolinguistic groups. Some of the people of Arunachal Pradesh have converted 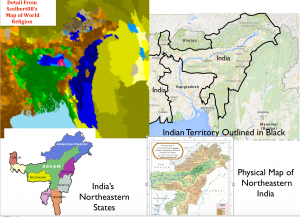 Donyi-Polo (also Donyi-Poloism) is the designation given to the indigenous religions, of animistic and shamanic type, of the Tani and other Tibeto-Burman peoples of Arunachal Pradesh, in north-eastern India. The name “Donyi-Polo” means “Sun-Moon”, and was chosen for the religion in the process of its revitalisation and institutionalisation started in the 1970s in response to the coercive proselytization of Christianity and the possibility of absorption into Hinduism.

The religion has developed a congregational system, hymns to be sung composed in the Tani ritual language of shamans, a formalised philosophy-theology and iconography of the gods and temples.

A similar movement is underway in the tribal belt of the Chota Nagpur Plateau in the Indian state of Jharkhand, where the new/old faith of Sarnaism is gaining strength. As explained in a different Wikipedia article:

Sarnaism or Sarna (local languages: Sarna Dhorom, meaning “Religion of the Holy Woods”) defines the indigenous religions of the Adivasi populations of the states of Central-East India, such as the Munda, the Ho, the Santali, the Khuruk, and others. During, colonial rule it was subsumed as a folk form of Hinduism, in recent decades followers have started to develop an identity, and more recently even an organisation, distinct from Hinduism, similarly to other tribal religious movements such as Donyi-Polo or Sanamahism. …

Evidently, Christians in the Chota Nagpur region have been attracting converts in recent years. As the map shows, some parts of this region have clear Roman Catholic majorities. Catholicism has a long history in this area, dating back to the actions of Flemish Jesuit missionaries in the late 1800s. According to a recent article in ACN-USA News, “Catholic beliefs and practices have been important factors in drawing tribal peoples to the Catholic Church in north-east India, where Christianity has grown phenomenally.” I would, however, like to see more solid data on this phenomenon.

Other interesting and important features are also evident on Scolbert08’s map. One example is the fairly solid belt of Buddhism (Theravada) in the Chittagong Hills of southeastern Bangladesh. Although Buddhism is rarely associated with Bangladesh, up to a million Bangladeshis adhere to this faith. At one time, Buddhism was common if not prevalent over the area that now constitutes Bangladesh, but the religion survived only in the more remote upland tracks of the southeast. (Throughout northeastern South Asia, upland areas correlate with religious minorities.) Bangladesh also has some Hindu majority districts in the southwest, a pattern that generates political complications. As explained in a Wikipedia article:

Despite their dwindling numbers, Hindus [in Bangladesh] still yield considerable influence because of their geographical concentration in certain regions. They form a majority of the electorate in at least two parliamentary constituencies (Khulna-1 and Gopalganj-3) and account for more than 25% in at least another twenty. For this reason, they are often the deciding factor in parliamentary elections where victory margins can be extremely narrow. It is also frequently alleged that this is a prime reason for many Hindus being prevented from voting in elections, either through intimidating actual voters, or through exclusion in voter list revisions (e.g., see Daily Star, 4 January 2006).

As a final point, it is noteworthy that the Rohingya Muslim area of Burma (Myanmar) along the border with Bangladesh is not evident on the map. As most Rohingya have been denied citizenship in Burma, they are evidently not counted in enumerations of religious belief.