The Moravian Church has a good claim to being the oldest Protestant denomination, tracing its origin back to the Bohemian Reformation of the early 15th century, closely associated with Jan Huss. “Hussites” were persecuted at the time and eventually defeated in battle, and during the Counter-Reformation, Bohemia and Moravia were brought back into the Roman Catholic fold. In the Czech Republic and Slovakia today, however, some 100,000 to 180,000 people belong to the Czechoslovak Hussite Church, which follows the traditions of the Bohemian Reformation, although it did not break away (again) from the Roman Catholic Church until after World War I. The much larger Moravian Church, with an estimated 750,000 adherents, traces its history more directly to the Bohemian reformers of the early 1400s. In 1722, an underground group of believers, the Bohemian Brethren or “Hidden Seed,” who had been living in northern Moravia in what is now the Czech Republic, accepted an invitation to resettle in upper Saxony, a Protestant stronghold. As they began to proselytize, their sect expanded. One of their acts was to set up a watch of 24-hour-a-day prayer, which supposedly lasted for 100 years.

At roughly the same time as their relocation to Saxony, the Moravians began to send missionaries abroad, first to Scandinavia and then to Greenland, the Caribbean, and indigenous communities in North America. Some of their early converts were eventually transferred to the Lutheran or Presbyterian churches, but elsewhere the Moravian Church established a permanent presence. In 1847 missionary activities commenced among the Miskitu Indians of eastern Nicaragua, who at the time maintained their own kingdom in alliance with Great Britain. Most Miskitus today adhere to the faith, as do members of the neighboring Sumu and Rana indigenous groups. Some 83,000 people in Nicaragua currently belong to the Moravian Church.

Moravian proselytizers came later to Tanzania, establishing their first mission in 1891. They were quite successful; current figures put the Moravian population in the country at 500,000 (out of a global total of approximately 750,00). I was not able to find the data that would have allowed me to make a world map of Moravian membership, but the Wikipedia chart of the church’s organization, posted here, gives a good indication of the centrality of Tanzania in the faith today.

The Mennonite Christian tradition traces its origins to the so-called Radical Reformation of the Anabaptists in 16th-Century Europe. Pacifistic beliefs led to resistance against military conscription, which in turn led to persecution and hence migration. A particularly large resettlement movement to the Americas occurred after the Russian Revolution, as Mennonites were targeted by Bolsheviks as “kulaks,” or well-to-do peasants. By the mid 20th century, most Mennonites lived in the Western Hemisphere. Over time, numerous schisms occurred, resulting in a profusion of sects. Many Mennonite groups remain somewhat separated from societies in which they live, and some of them resist various forms of modern technology. As a whole, however, the Mennonite tradition is diverse and decentralized. As noted in the Wikipedia:

For the most part, there is a host of independent Mennonite churches along with a myriad of separate conferences with no particular responsibility to any other group. Independent churches can contain as few as fifty members or as many as 20,000 members. Similar size differences occur among separate conferences. Worship, church discipline and lifestyles vary widely between progressive, moderate, conservative, Old Order and orthodox Mennonites in a vast panoply of distinct, independent, and widely dispersed classifications. For these reasons, no single group of Mennonites anywhere can credibly claim to represent, speak for, or lead all Mennonites worldwide. 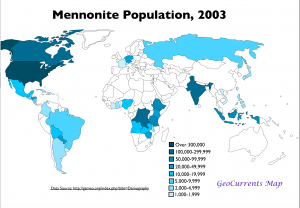 According to some sources, the largest affiliate of the Mennonite World Conference—and the largest single Mennonite organization—is the Meserete Kristos Church of Ethiopia, which counts “255,462 baptized members and a worship community of over 471,070 persons as of November 2014.” This particular denomination has grown explosively in recent decades; as a result, a current map of global Mennonite membership would depict Ethiopia in a darker shade of blue than that found on the map that I have posted here, derived from 2003 data. As noted in the Wikipedia:

The [Ethiopian Mennonite] church has over 756 congregations and 875 church planting centers scattered in all 18 Administrative Regions of Ethiopia. The denomination’s growth rate in the last decade stands at 37%. … Meserete Kristos grew out of the work of Ethiopian Mennonite Missions in the 1950s. Mennonite missions set up hospitals and schools, eventually starting a church as a result of demand. Growth in early years was rather slow, until 1974, when the Derg took power. At the time, 5,000 Meserete Kristos members went into hiding. Small groups started, and meetings and baptisms were held at night. During this time many Mulu Wongel [an evangelical Pentecostal group] members joined the church, and growth was astronomical. 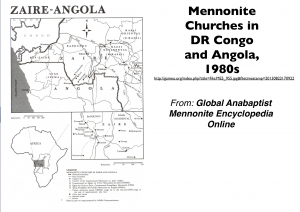 Ethiopia is by no means the only African country with a substantial Mennonite presence. In DR Congo, the faith dates back to 1912, when Mennonite missionaries arrived in the West Kasai region. The Mennonite faith seems to have expanded dramatically in the mid and late 1900s. As explained in the Global Anabaptist Mennonite Encyclopedia Online:

Mennonite Central Committee (MCC) first became involved in Congo in the 1950s, when a few North American conscientious objectors were sent as alternative service volunteers. In the aftermath of political independence (1960), MCC teamed with the Congo Protestant Council to form the Congo Protestant Relief Association (CPRA), which became a channel for relief supplies for various areas where local populations were displaced by political unrest. Known as ZPRA, this cooperative project with Zaire (Congo) mission and church communities continues.

It was also in the 1960s that Congo became one of the areas selected by MCC administrators for service for Pax and Teachers Abroad Program (TAP) personnel. During that decade a steady stream of young people came to Congo, where they served in a wide variety of roles with Mennonite and other missions. MCC eventually moved beyond construction sites and schoolrooms to cooperative efforts with Congo Mennonite churches in various rural development projects.

By the 1980s, MCC collaborated with the three Zaire (Congo) churches in helping to sponsor seminars for pastors on a variety of topics including issues of peace, justice, and development. French-speaking Mennonites from Europe and North America were resource people for these much appreciated sessions. 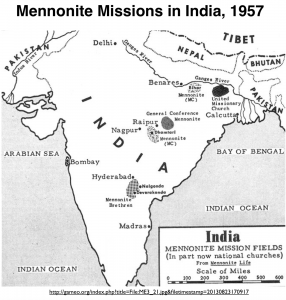 Mennonite missionaries have also been active in India, realizing a degree of success in Hindu-majority regions in which most Christian proselytizing efforts have failed. In recent years, tensions have flared in some of these areas. In 2008, Mennonite and other Christian communities in the Indian state of Odisha (then spelled Orissa) were attacked by Hindu extremists, forcing some 30,000 to 70,000 people to flee their homes. Relations between Mennonites and their Hindu neighbors have more often been relatively good. Mohandas Gandhi reportedly held the pacifistic Mennonite tradition in high repute, writing in 1947 to a Mennonite missionary, “Why worry? I am in the same boat with you.”

The Mennonite community today is roughly divided between “Euro-Mennonites” in Europe and the Americas and Mennonite converts in Africa and Asia. In Latin America, Mennonites are sometimes criticized for their high birth rates and agricultural expansion. As a writer with The Guardian argued in 2010:

What is it with Mennonites? Two weeks ago I wrote a piece from Paraguay on how the vast dry forest known as the Gran Chaco was being felled at an alarming rate mainly by people from this Christian fundamentalist sect.

Having fled from persecution in eastern Europe 80 years ago, they went to one of the most inhospitable places on earth and by the sweat of their brow – and a lot of help from the indigenous peoples on whom they depended – they have survived in the wilderness. But now, it seems they have moved from Biblical exhortations for stewardship of the Earth to outright exploitation and dominion. They have bought up nearly 2m hectares, worth, these days, in the region of $600m (£382m), made themselves fabulously wealthy from a $100m-a-year meat and dairy business, and are now in danger of totally destroying an unique ecosystem, indigenous peoples and all.

The Mennonite response was rather measured. As reported in the Mennonite Creation Care Network:

MCCN exists to support the Church in its green discipleship. We encourage collaboration and networking, and our web site is designed to showcase positive change taking place among Mennonite institutions and families. We typically post hopeful stories about people putting up solar panels, biking to work and planning inspiring events.

On October 4, an article that did not quite fit our categories appeared in The Guardian, a major British newspaper. “Chaco deforestation by Christian sect puts Paraguayan land under threat,” the headline read. The author, John Vidal, is the paper’s environmental editor.

Vidal asserts that Mennonite farmers in the Chaco are “expanding aggressively,” using a style of farming “totally unsuited to the fragile soils of the Chaco” and causing desertification and erosion in one of the world’s most fragile and diverse environments. Within days, a number of other environmental sites had picked up the story. A follow-up, detailing some responses from Paraguay appeared in The Guardian October 22.

The Paraguayan article prompted vigorous discussion among MCCN’s Creation Care Council and raised a number of issues for us at MCCN. Among them: