Mapping Religion in the Unfortunate Atlas of Islamic Republic of Pakistan

Mapping world religions is a challenging project, as will be discussed in a forthcoming GeoCurrents post. Although I have been disappointed by most global religion maps, nothing compares to the maps found, yet again, in the Atlas of Islamic Republic of Pakistan (2012, Rawalpindi, Survey of Pakistan Press). These depictions are so amusingly odd and awful that they merit extended consideration. 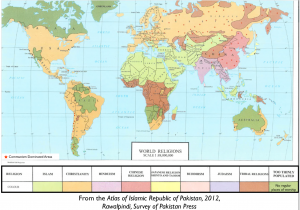 When I opened the atlas to the ‘World Religions” map, I expected it to exaggerate the extent of Islam. On first glance, this expectation seemed to have been met. Note that the map incorrectly shows the Islamic realm as extending from Greece through almost the entire extent of the former Yugoslavia. Other non-Muslim areas added to the zone of Islam include: north-central Ethiopia and adjoining areas of Eritrea, much of southern Nigeria, the northern half of Madagascar, western Mongolia, East Timor, Papua and other non-Muslim parts of Indonesia, and northern Mindanao and Samar in the Philippines. Yet on closer examination, it quickly became apparent that the map minimizes the world of Islam in other places. Predominately Muslim areas depicted as non-Muslim include: Azerbaijan; the north Caucasus; Tatarstan and adjacent areas of the central Volga; central and western Kazakhstan; western Turkmenistan and Uzbekistan; northern Kerala in India; northern Ivory Coast; northern Ghana; Ningxia in China; the Rohingya area of eastern Burma; eastern Guinea; and southern and east-central Sulawesi in Indonesia. It would seem that incompetence, not ideology, has driven the mapping of Islam in this atlas. 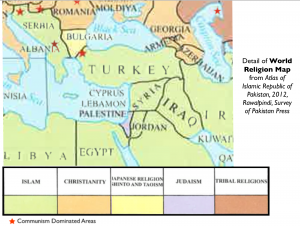 Most astounding, however, is the map’s portrayal of the Jewish area in the eastern Mediterranean. It is no surprise that the cartographers do not use the label “Israel,” but instead depict Israel along with the West Bank and the Gaza Strip as “Palestine.” What is surprising is the fact that they map this entire region as the realm of Judaism. The more general portrayal of the eastern Mediterranean is so bizarre that that I have magnified it to form a separate map. Note that an oddly enlarged Bulgaria is depicted as following “Japanese Religion Shinto and Taoism” (wrong in so many ways), that the western Balkans are shown as an Islamic yet Communist-dominated area composed only of Serbia and Albania, that Cyprus, Lebanon (“Lebamon”), and Kuwait appear as labels but not as places on the map (Kuwait is actually depicted as part of the Gulf), and that western Turkey is marked as falling under communist domination. 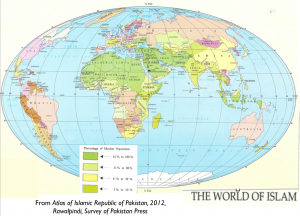 The atlas contains a separate map of “The World of Islam” that is nearly as weird. This map is politically based, depicting the percentage of Muslims found in various sovereign states, although a few countries (China, Egypt) are divided. (The date of the political base-map appears to be 1992, as the Soviet Union does not appear, yet Eritrea is mapped as part of Ethiopia.) This map’s most clumsy element is it color scheme, which descends, as the Muslim percentage descends, from green to light green to yellow, but then pops back to a darker yellowish green in the bottom category, making the map difficult to interpret. But again, we can see that the realm of Islam has been bizarrely extended in some places (with both Switzerland and Ukraine mapped at more than 81 percent Muslim) and reduced in others (Kyrgyzstan, Uzbekistan, and Tajikistan are shown as having a Muslim minority, while Yemen, Oman, the UAE, and Egypt’s Sinai Peninsula are mapped as less than 81 percent Muslim). 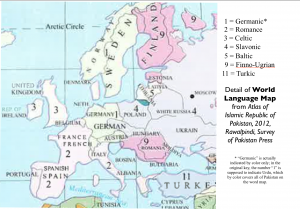 Unfortunately, the atlas’s world language map is no better than its religion map. I have posted here a detail of the portion of the map that covers Europe, which is particularly amusing. I am entertained not so much by the blatant errors in language mapping, but rather by the failure to capture both the basic patterns of land and sea and the essential contours of political geography. Note that two peninsulas have been turned into islands, while most of the Balkan Peninsula has become an extension of the Mediterranean. How, I wonder, could such a map have been made and published?