As mentioned in the previous post, a number of innovative world maps of religion have recently appeared on the internet. Several of these are posted at the bottom of the Wikipedia article on “Major Religious Groups” in a section labeled “Maps of self-reported adherence.” Today’s post will focus on three of the maps found here. 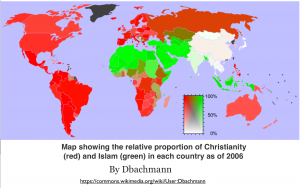 The first map reproduced here shows only two religions, Christianity and Islam. It does so, however, in an unusual manner, mapping not merely adherents of these two faiths but also those who are neither Muslim nor Christian (whether they follow other religions or are irreligious). Unfortunately, the map has little in the way of a key and lacks explanatory notes, but it is easy to understand how it works, at least in theory. A county that is nearly 100 percent Muslim is thus depicted in bright green, a country that is nearly 100 Christian is depicted in bright red, a country that has almost no adherents of either faith is depicted in white, and a country of mixed faith is accorded a mixed color. Countries and dependencies that are not measured are portrayed in black, as is French Guiana, which should be the same color as the rest of France.

Although the idea behind this map is powerful, I am not sure that it works out as well in practice. To begin with, the color scheme does not make intuitive sense. At first glance—to me at any rate—darker green countries such as Syria, Egypt, and especially Lebanon would appear to have a higher percentage of Muslims than lighter green countries such as Algeria and Afghanistan, but the opposite is true. Countries that are fairly evenly divided between Muslims and Christians, such as Nigeria, would logically be depicted in brown, but here Nigeria looks much more green, and hence much more Muslim than Christian. The same is true for Eritrea, which according to some sources is evenly split between the two faiths, although the Pew Research Center claims that it is actually about two-thirds Christian. Only Ethiopia looks truly brown to me, but it has a clear Christian majority according to almost all sources. Bosnia, mapped in a pale green shade looks like it is divided between Muslims and people who follow neither Christianity nor Islam, but according to most sources the country is almost half Christian. 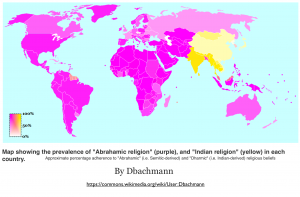 In the end, I commend the author for making such an innovative map, but I do think that it could benefit from some major adjustments. I am more positively inclined toward another map made by the same author, that comparing the prevalence of “Abrahamic” and “Indian” religions. Most world religions can be grouped together in such a manner, although they rarely are. The most striking feature of this map is the global prevalence of the Abrahamic faiths, with those of Indian derivation mostly confined to East, South, and Mainland Southeast Asia. Bangladesh is a striking exception to this pattern. The only “orange” countries, heavily mixed between these two traditions, are the Guyanas, Malaysia, South Korea, and Mauritius, although Fiji and Trinidad & Tobago should be placed in this category as well, while French Guiana should be mapped along with the rest of France. South Korea is appropriately depicted in a light orange, as almost half of its residents profess no religious faith. 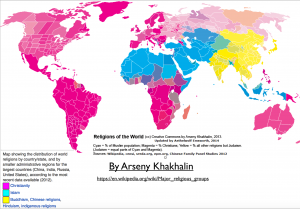 The final map, by Arseny Khakhalin, makes a three-fold division between Islam, Christianity, and an odd and unjustifiable category of Hinduism, Buddhism, Chinese religions, and indigenous religions. It also maps Judaism separately with an equal mixture of cyan and magenta, colors that are used map Islam and Christianity respectively. I find this maneuver confusing, as it would seem that a country evenly divided between Muslims and Christians, such as Nigeria, should be mapped in the same manner. The most striking feature of this map is its division of a number of large countries into their constituent units. This strategy reveals a number of important and interesting features, such as the prevalence of Islam in Kashmir and Xinjiang, and the unusual religious nature of Russia’s Republic of Kalmykia (which is heavily Buddhist). The small Christian states of eastern India also stand out, although I suspect that they should be mapped in a deeper shade of magenta, as Nagaland is reportedly 90 percent Baptist. It also seems that some countries (such as those of Scandinavia) and some regions (such as the provinces of Argentina) are depicted as too Christian, as they have high percentages of non-believers.  This  issue, however, concerns the data sources, not the cartography.

Several other world religions maps have recently been posted on-line that break many other countries down into their constituent units. I hope to put up a post about these maps later this week, although writing and grading mid-term examinations may force me to delay this until next week.