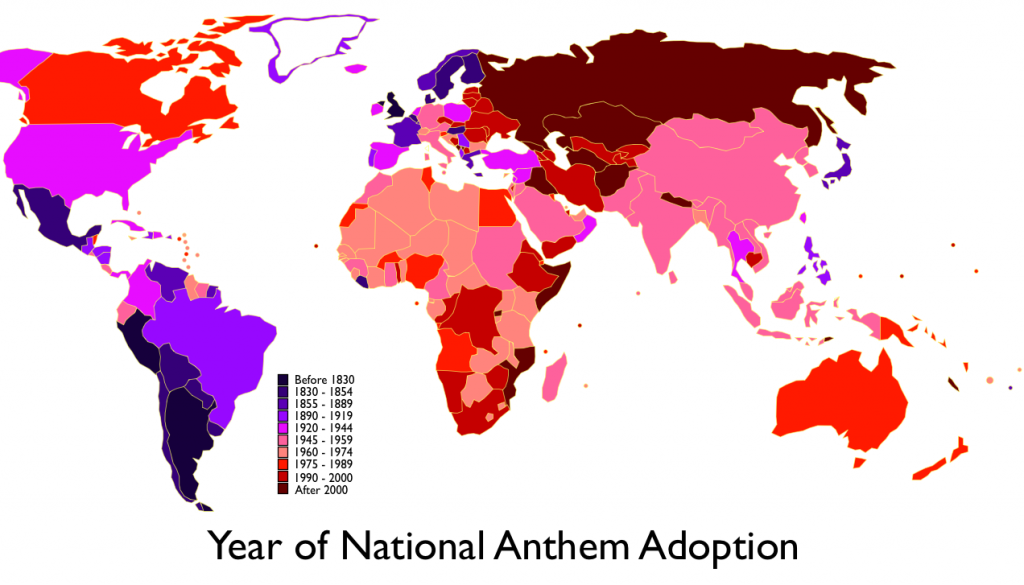 Every country and many non-sovereign states have national anthems. They are an indispensable representation of nations, played from official receptions to sporting events. As described by Wikipedia:

“A national anthem is a generally patriotic musical composition that evokes and eulogizes the history, traditions and struggles of its people, recognized either by a nation’s government as the official national song, or by convention through use by the people.”

The map shown above groups countries by when they adopted their national anthems (all dates are taken from this website, a detailed database of all national anthems). In some instances, the data had to simplified in order to create a single chronology, especially in regards to de facto and de jure anthem recognition. Also, if a country returned at some point to an older national anthem, the date of re-adoption was used. Furthermore, the map charts the adoption of anthem music and not necessarily lyrics, which in some instances came later.

Several regional trends appear on the map, mostly related to dates of independence from colonial powers. In particular, Latin America stands out due to the longevity of its anthems. No other region of the world has quite as many long-standing national songs. Most Latin American countries gained independence in the early 1800s, and many of the anthems date from the middle of the century. In fact, Latin American anthems are so distinctive that they can be grouped together as an “anthem family”:

“Latin American epic anthems: Possibly the easiest to identify, these are found in Latin American (Spanish-speaking Central and South America) countries and tend to be rather long, have an epic quality in the music, often containing both a quick, patriotic section of music, and a slower, stately part, and consists of many verses, usually chronicling the history of the country. Many are also composed by Italians (or other Europeans) … Examples include Argentina, Ecuador, El Salvador, Honduras, and Uruguay.”

Most Latin American anthems require four to five minutes to be played in full. Such lengthiness represents a significant problem for events such as the Olympics, which allows only eighty seconds per anthem. As a result, only a short section of many Latin American national songs are actually played. It should also be noted, however, that a few Latin American anthems, such as Venezuela’s, are much shorter.

The trend of new national anthems appearing after independence is visible in other regions of the world including South Asia, Southeast Asia, East Asia, Africa, and Eastern Europe. In eastern and southern Asia, most countries gained sovereignty shortly after World War II, and many adopted existing anthems as part of their new identity.  Before their official adoption, these musical pieces served different purposes, but most had been associated with nationalist movement.  The current Chinese anthem was originally written in 1935 and used as a Japanese resistance song, but once the Communists took power in 1949, the communists adopted it and elevated it to national standing. Similarly, Indonesia’s anthem was originally the song of an anti-colonial party, and was adopted by the new government after independence. In Africa, most countries selected new anthems as they gained independence between 1958 and 1975. Eastern European countries that gained independence from the Soviet Union in 1991 also opted for new anthems at the time, as did several of the other new states of the region.

Countries that have retained independence for long periods of time often have long-standing national anthems. Japan’s anthem dates back to 1883 during the Meiji period, as a national anthem was perceived as a requirement of a modern nation. Thailand and Tonga, which largely escaped European colonialism, have also used the same national anthems for a long period of time.

In regard to issues of national identity, the Commonwealth countries of Canada, Australia, and New Zealand are particularly intriguing. As part of the British Empire, they long used “God Save the King/Queen” as their only official anthems. Although local songs began to be used in unofficial circumstances, “God Save the King/Queen” continued to be employed long after independence had been gained. Canada did not switch to “Oh Canada” until 1980. Update: Although “Oh Canada” was not the de jure anthem until 1980, by 1939, it was considered the de facto national anthem. In Australia, the change came only in 1984. In New Zealand, “God Save the King/Queen” is still a co-anthem (although rarely used), and was only demoted to ‘co’ status in 1977. For these countries, switching away from the British anthem reflected increasing nationalist sentiments. At the same time, the importance of their British heritage is demonstrated by their reluctance to finally abandon “God Save the King/Queen.”

Several countries have changed their national anthems since 2000, often signaling intent by the government in power to shift the national image. Although Russia adopted a new anthem in 1990, in 2000, Putin returned to the official Soviet music, albeit with new lyrics, advertising a shift from post-Soviet instability. Under the Taliban, Afghanistan was the only country without a national anthem, as its rulers rejected virtually all forms of music as un-Islamic. Afghanistan’s old national anthem was restored in 2002 after the outing of the Taliban, only to be replaced again by the Karzai government in 2006 as a sign of a new Afghanistan. In 2001, Rwanda changed to a new anthem, adopting it as well as other official symbols, signifying the new post-genocide Rwandan order.

The selection of a national anthem is not only a reminder of differences of national differences, but can also demonstrate similarities. With the independence from the Soviet Union in 1991, Estonia re-adopted its pre-Soviet national anthem, which is the exact same piece of music used by nearby Finland. This unusual shared national anthem is symbolic of the very close cultural and linguistic relations between Finns and Estonians.

Although a number of countries around the world are still changing their national anthems, Latin America’s stability in this regard is noteworthy. This constancy demonstrates how anthems can become more important to national identity than regimes themselves, as new governments in Latin America do not change the anthems.  However, for much of the rest of the world, new national songs will likely emerge as political instability continues and as new regimes try to influence national identity.