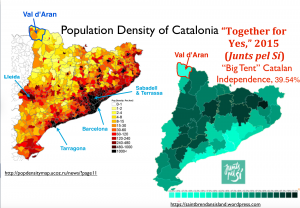 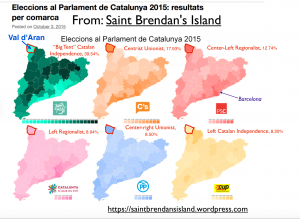 d’Aran, located in the extreme northwestern portion of Catalonia. With a population of 9,993 scattered over 633.5 km2 (244.6 sq mi), Val d’Aran is hardly an urban area, yet its voters firmly rejected the independence movement, favoring instead regionalist and unionist parties.

Val d’Aran’s rejection is Catalan nationalism is easy to explain, as the comarca is not part of the Catalan cultural region. The indigenous inhabitants of the valley speak Aranese, a dialect of the language of Occitan (which is itself often disparaged as a mere dialect) that formerly extended across southern France. Although fewer than 5,000 people speak Aranese as their native tongue, it was granted the status of the third official language of Catalonia (along with Catalan and Spanish) in 2010. (If this maneuver was designed to bring the people of Val d’Aran over to the side of Catalan nationalism it evidently failed.) According to the 2001 census, roughly a third of the comarca’s inhabitants speak Spanish as their native language, whereas some 19 percent speak Catalan. As noted in the Wikipedia, “speakers of languages other than the local Aranese are typically people born outside the valley, or their children.” 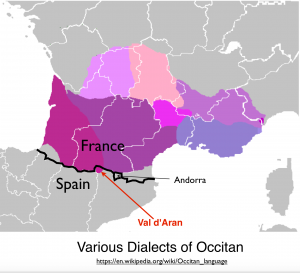 Physical geography helps explain why Val d’Aran is part of the Occitan rather than the Catalan linguistic sphere. Unlike the rest of Catalonia, Val d’Aran is located to the north of the Pyrenees crest, with its streams draining through France to the Atlantic Ocean. It is thus not surprising that its cultural affiliations link it more to southern France than to northeastern Spain. Maps of the Occitan language, like the one posted to the left, thus typically show Val d’Aran as something of an outlier, the only part of the Occitan linguistic region located on the Spanish side of the border. 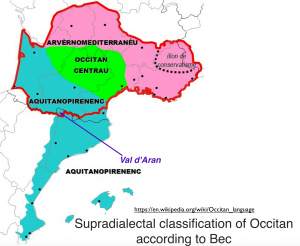 From a broader linguistic perspective, however, this view is somewhat misleading. Most students of the Gallo-Romance languages place Occitan and Catalan in the same category, 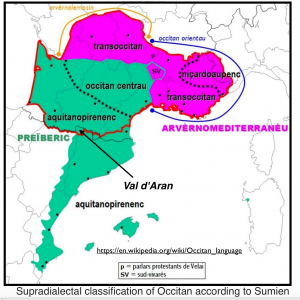 In pre-Roman times, the people of Val d’Aran probably spoke a precursor to Basque, or at least a closely related language in the hypothesized Vasconic family. The place-name itself suggests as much. According to the Wikipedia, “The name Val d’Aran is formed from val in Gascon [an Occitan dialect], meaning valley, and aran from Basque haran, also meaning valley. The name is thus a pleonasm or tautological place name as it translates to Valley of the Valley.” In pre-Roman times, the Pyrenees did not form a linguistic frontier. As noted in another Wikipedia article: 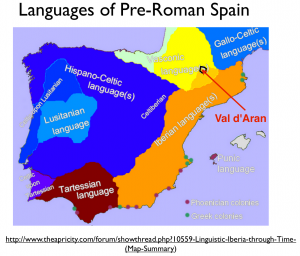 There are many clues that indicate that Aquitanian [a pre-Basque Vasconic language] was spoken in the Pyrenees, at least as far east as Val d’Aran. The place names that end in ‑os, ‑osse, ‑ons, ‑ost and ‑oz are considered to be of Aquitanian origin, such as the place-name Biscarrosse, which is directly related to the city of Biscarrués (note the Navarro-Aragonese phonetic change) south of the Pyrenees. “Biscar” (modern Basque spelling: “bizkar”) means “ridge-line”. Such suffixes in place-names are ubiquitous in east of Navarre and Aragon, with the classical medieval ‑os > ‑ues taking place in stressed syllables, pointing to a language continuum both sides of the Pyrenees.