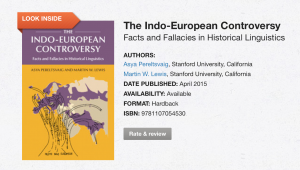 Although GeoCurrents focuses mainly on contemporary issues, long-time readers know that I also have a strong interest in the deeper reaches of human history, and that I have been involved in intellectual controversies related to the origin and spread of the Indo-European language family. The fruits of my work on historical linguistics are now available in a frightfully expensive book co-written with linguist Asya Pereltsvaig: The Indo-European Controversy: Facts and Fallacies in Historical Linguistics. This argumentative work seeks to defend traditional methods in historical linguists against those who would reinvent the field as a quasi-biological science. It also argues against the notion that the Indo-European language family originated among Neolithic farmers in Anatolia, and instead contends that that it most likely originated among semi-pastoral peoples living in the grasslands of southern Russia and Ukraine (the so-called Steppe Theory). As it so happens, when the book was in press new genetics studies were published that strongly support the Steppe Theory. 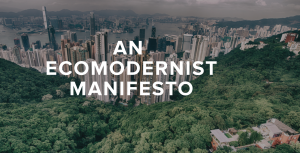 While GeoCurrents was suspended during the winter months, I focused most of my intellectual efforts on another abiding interest, environmental philosophy. My perspective here is best labeled “ecomodernism.” The nascent ecomodernist movement is based on deep concern for the preservation of nature coupled with equally deep support for broad-based economic development and technological progress, as can be seen in the recently published “Ecomodernist Manifesto.” Such ideas are anything but extreme, but within the environmental community itself they are regarded as reactionary if not heretical, and we ecomodernists 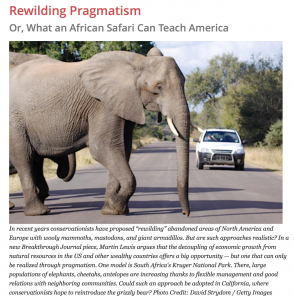 are subjected to a good deal of abuse by Green stalwarts. At any rate, my essay on “Pragmatic Rewilding” has recently been published by the Breakthrough Institute, the primary eco-modernist think tank, which is based in Oakland, California.

I will be attending the annual Breakthrough conference from Sunday through Tuesday of next week. When it is over, I will begin putting up a series of GeoCurrents posts on the recent election in Turkey.