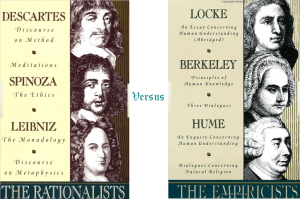 Epistemological issues lie near the core of the Indo-European controversy. How we acquire knowledge of the world is, in turn, one of the abiding issues of philosophy. At the risk of gross simplification, most claims to knowledge are based either on reason and evidence or on deference to accepted authorities. The latter foundation is generally religious (“it must be true because it is in the Bible/Quran etc.”), but can be based on secular idea systems (“it must be true because Aristotle/Marx etc. said so”). But such authority-based beliefs are seldom open to question, and hence have little bearing on actual intellectual debates. By the same token, appeals to intuition or mystical experiences carry no weight in scholarly discourse. In this realm, reason and evidence generally reign supreme.

In the history of philosophy, two epistemological tendencies long vied for supremacy: rationalism, which holds that reason alone gives us solid knowledge, and empiricism, which stresses the acquisition of knowledge through the senses.* To a significant degree, the “struggle” between these two approaches to knowledge was settled long ago; in the humanities as well as the sciences, most agree, both are necessary. Reason alone can generate extraordinarily complex certainties (pure mathematics), but by itself tells us little about the world. Data acquired through the senses alone can provide richly factual descriptions, but little in the way of coherent exposition let alone explanation. Science thus progresses through an intricate dance of reason and fact, the one always playing off against the other.

But if this central epistemological issue was resolved long ago, allowing the florescence of science, “rationalism” and “empiricism” remain rooted as psychological inclinations. Some scholars seek grand, unifying theories, ideally rooted mathematical logic; others remain suspicious of such schemes and instead stress complexity, diversity, and exceptions. In the long run, such a difference in proclivities is mostly productive, as two approaches can correct each other. For this to work, however, partisans on both sides must play by the same rules. “Empiricists,” for their part, need to accept the provisional truth** of abstract models that are shown to correspond closely to reality. “Rationalist,” in turn, must relinquish, or at least reformulate, their models when they are contradicted by solid evidence.

Such “good-faith rationalism” is encapsulated by one of my favorite quotations in intellectual history, uttered by T. H. Huxley (“Darwin’s Bulldog”) in reference to the social theorist Herbert Spencer: Spencer’s idea of a tragedy, Huxley quipped, “is a theory killed by a fact.” History and accumulated facts have not been kind to Spencer’s sociology, and his social Darwinism, based on the “survival of the fittest” (his coinage, not Darwin’s) is now generally rejected. Yet as the quotation shows, Spencer was open to contradictory evidence and hence remained well within the domain of genuine scholarship.

I will readily admit that my own inclination is one of pronounced empiricism. I love complexity and I revel in uncertainty. Driven by the quest for knowledge, I find theory useful and indeed necessary, but only in limited doses. (I can’t recall the source, but one wit once likened social theory to cheesecake: highly satisfying when consumed at the end of a balanced meal, but nauseating when eaten to the exclusion of all other foodstuffs.) I find “a theory killed by a fact” more comedic than tragic—and the more powerful the devastated theory, the greater my satisfaction. If new findings were announced tomorrow that cast doubt on the General Theory of Relativity, I would feel like dancing in the street. But for now, I fully accept the Einsteinian view of the universe (at least I can take some comfort in Einstein’s failure to reach a unified field theory of physics, just as I smile at the embarrassing lack of empirical validation for the mind-boggling assertions of string theory). If I were to reject relativity merely because I do not like it, then my empiricism would cease to be a mere tendency and would instead become an intellectual pathology.

As can perhaps be gathered from this discussion, I regard the rationalism of the Science article on Indo-European origins and expansion as exemplifying such intellectual pathology. Fact after fact after fact show that the model does not work, yet all such empirical evidence is merely brushed aside rather than being effectively countered or even argued against. As a result, the entire approach becomes anti-scientific, despite the intention of its authors and the name of the journal in which it was published.

I am also convinced that excessive rationalism, whether pathological or not, has had negative consequences for social, economic, and political inquiry more generally. Consider, for example, graduate programs in international relations in the United States, programs that train many future national and global leaders. I have some experience here, having been interim director of Stanford University’s MA program in International Policy Studies (IPS) from 2004 to 2006. Here I encountered a curriculum focused on such rationalistic endeavors as econometrics and game theory. A course on “efficient market theory” also occupied a prominent position—a theory that was later blamed by such experts as Paul Volcker for contributing to economic crisis of 2008. Substantive courses on history, geography, and politics were also on the books, but instruction here was haphazard rather than systematic.

As interim IPS director, my main initiative was to hold an annual workshop to bring back successful alumni of the program to talk about their experiences in the “real world” and muse on how their educations at Stanford had prepared them—or failed to prepare them—for the challenges that they later faced. I asked each participant whether game theory had been of any value in their post-gradate careers; every one of them said that it had never even come up.*** Many of them, however, stressed how hard they had had to struggle to master basic world geography, expressing regret that their educations had not afforded them adequate preparation in this crucial area.

After I was relieved of my duties at International Policy Studies, the university enhanced the program, increasing the number of courses needed to gain a degree and ensuring that the curriculum would become even more “rigorous”—in other words, more heavily geared toward abstract, mathematical models. I rarely see IPS students in my classes any more, much to my regret. The guiding belief seems to be that the necessary knowledge of the world can be picked up casually on one’s own time, without the need for systematic instruction or intellectual scaffolding.

From this experience I have come to suspect that the real purpose of such programs is not to teach students about international relations, although that does occur to some degree. The primary function is rather to certify that degree holders are intelligent and disciplined enough to master the involved mathematics of game theory, econometrics, and so on, and compliant enough to brook no objections to doing so. As such, this pedagogical system works much like that of Victorian Britain, when imperial administrators were trained through immersion in the Greek and Latin classics. Such a pedagogical approach is far from worthless, but neither is it ideal. We should thus not be surprised that our foreign policy experts and political leaders continue to make elementary blunders about the world. Such gaffes are not only embarrassing, but they also come at a high political cost.

*Admittedly, constructivist and pragmatist epistemological orientations do not fall into either the empiricist or rationalist camps, as they emphasize the making of knowledge. Only the most extreme forms of constructivism, however, jettison reason and evidence.

** Unassailable truth is a property of mathematics, not science. Science rests on verification, but it is accepted by almost all philosophers of science that such verification is never absolute.

*** This is not to argue that game theory has no practical applications, but only to insist that such applications are relatively limited. In several instances, moreover, game theory has failed empirical tests. As the authors of a 2006 article in Theoretical Population Biology blandly put it, “Economists and psychologists have been testing Nash equilibrium predictions of game theory models of human behavior. In many instances, humans do not conform to the predictions.”