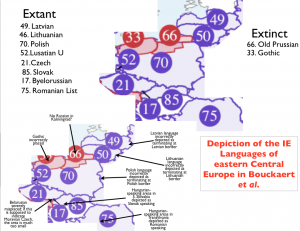 (Continued) The main problems with the language map of eastern Central Europe in Bouckaert et al. have already been discussed; to whit, the depiction of “national” languages as coterminous with state boundaries. The authors do occasionally deviate from this norm, showing, for example, a tiny non-Romanian area in northwestern Romania. Note also that they show Latvian as failing to reach Latvia’s northwestern coast. This view is indeed historically accurate, as northern Courland was the land of the Livonians, a Finnic-speaking people. The last native speaker of Livonian, however, died in 2009; for decades before that, Livonian was severely endangered and most speakers were bilingual in Latvian or Russian. If the map purports to depict the present situation, it is flatly wrong here. If it depicts 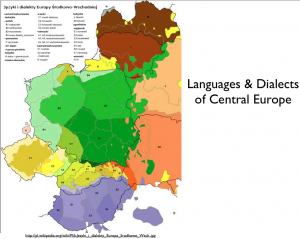 the relatively recent past, as it does for some areas, it is more on target. Unfortunately, no time specification is provided.

Such unspecified chronology is a more intractable problem for the depiction of extinct languages. Major languages of the distant past often experienced major geographical changes, sometimes literally moving en mass when their speakers migrated. The Goths, for example, probably originated in what is now Sweden, later crossed the Baltic into northern Central Europe, subsequently moved into the steppes north and northwest of the 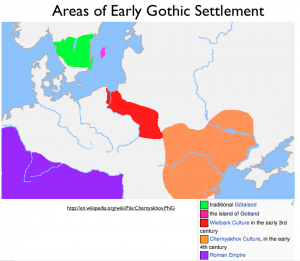 Black Sea, and eventually spread with victorious warrior bands over much of the Roman Empire; the final redoubt of the language was the Crimean Peninsula, where it persisted until the ninth century and perhaps until early modern times. Any Gothic language polygon would thus fit a specific place only at a specific time. Bouckaert et al. have apparently selected the period just after the movement of Gothic out of Scandinavia, although the area specified does not seem to match what (little) is known about the early relocation of the language (see the map to the left).

As mentioned in the previous post, the placing of Byelorussian (Belarusian) in a small corner of the Czech Republic is a careless transcription error. But the intended depiction, that of Eastern Czech, is still off base. Czech is not heavily differentiated into dialects. The truly distinctive forms of the language are half way to Polish. Cieszyn Silesian and other Lach dialects are regarded by most Czech linguists as a Polish-influenced form of Czech and by most Polish linguists as a Czech-influenced form of Polish (politics do tend to intrude into linguistic discussions). Such dialects, however, are not on the map. What is (supposed to be) shown is “Eastern Czech,” placed in a small corner in the southeastern part of the Czech Republic. It is unclear what this designation refers to. Across the entire eastern half of the republic, one finds the Moravian dialect (or dialects), which are not strikingly different from standard Czech. 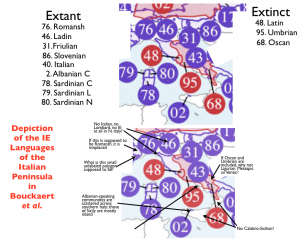 The linguistic depiction of the Italian Peninsula in Bouckaert et al. contains some curious features. This portion of the map is difficult to decipher, as extinct languages overlay extant languages, and much the area is covered by the circular labels. It is still clear, however, that the mapping here remains inconsistent. Italian is shown as extending neither into the Po Valley in the north nor to Sicily in the south. Fair enough: the local dialects spoken (or spoken until recently) in those 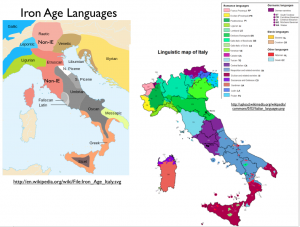 areas are markedly different from Standard Italian, based on the Tuscan dialect. Yet the authors place other parts of the peninsula with equally distinctive dialects, such as Apulia in the southeast, in the Italian language category. In regard to the extinct Indo-European languages mapped here, the major issue is why only Umbrian and Oscan were selected to accompany Latin. 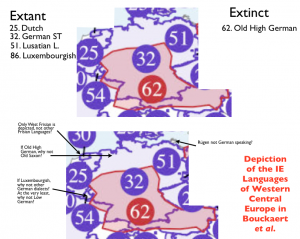 Most of the problems found on the map of Germany and environs have already been discussed. Note, for example, how Luxembourgish makes the cut on political grounds, whereas other distinctive German dialects are ignored. Of special note here is the demarcation of two Lusatian (or Sorbian) languages, although only one is labeled on this map segment. These Slavic tongues of eastern Germany are distinctive, and mapping them as separate languages makes linguistic sense. But it is difficult to understand why these relatively minor languages, with 40,000 and 10,000 speakers respectively, have been added to the tally, whereas Iranian and Indic I-E languages with hundreds of thousands to tens of millions of speakers have been ignored. 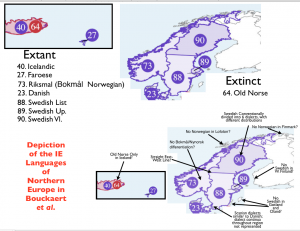 The language mapping of Scandinavia shows, yet again, striking geopolitical influence. Here we have Danish blanketing Denmark, Riksmal (or the Norwegian “national language”) everywhere in Norway except the islands and Finmark, and three separate Swedish languages covering all of Sweden except the islands, which remain unmarked. The straight east-west line that separates two supposedly distinct Swedish languages is a curious and highly unlikely feature. 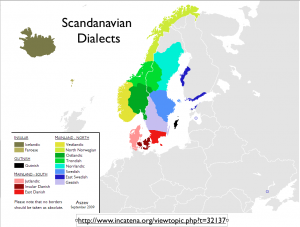 But as one would expect, the continental Scandinavian languages do not actually correspond so well to national territories. Overall, the region is characterized by a dialect continuum so pronounced that some scholars regard all of the mainland North Germanic tongues as a single, regionally differentiated language. Swedish and Danish are almost interintelligible, and Norwegian is often regarded as a kind of a bridge: as a common saying puts it, “Norwegian is Danish spoken in Swedish.” (Norwegian vocabulary is similar to that of Danish, whereas its phonology is more like that of Swedish). But it is more complicated than that, as there is no single Norwegian language at any level. Local dialects cross the border with Sweden, but even in terms of official state recognition, Bokmål (“book language”) competes with Nynorsk (“New Norwegian”), and neither of these two variants are exactly the same as the standardized but non-official Riksmål (“national language”) and Høgnorsk (“High Norwegian”) forms. The differences between Bokmål and Nynorsk are not purely lexical (e.g. Bokmål pike ‘girl’ vs. Nynorsk jente ‘girl’), but concern grammatical patterns too (e.g. Bokmål does not distinguish masculine and feminine genders, whereas Nynorsk does). In a sense, the differences between Bokmål and Nynorsk are more 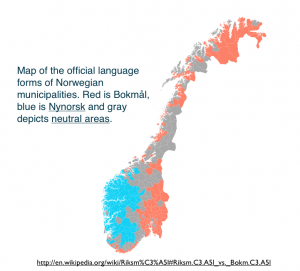 pronounced than those between Bokmål and Danish (e.g. Danish word for ‘girl’ is pige, and most dialects of Danish and its standardized form do not distinguish masculine and feminine genders). The contention among these different language varieties is at once political, cultural, and historical, tied up with Norway’s former subordination to Denmark. Norwegian linguistic nationalists have often wanted to purge specifically Danish elements from the language, whereas linguistic traditionalists would like to preserve them.

Legacies of geopolitical change are also evident in the Scania region of southern Sweden. The dialects of Sweden’s far south are close to those of Denmark—so close, in fact, that some scholars place them within an “East Danish” category. Significantly, Scania was part of the Kingdom of Denmark until it was lost to the rising power of Sweden in 1658; it did not become an integral part of Sweden, however, until 1719, and which point a policy of linguistic “Swedenization” was initiated. “Eastern Danish” is thus considered by some to be a more historical than a linguistic category.

One of the oddest features of the mapping strategies employed by Bouckaert et al. is their reluctance to include islands within the territories of any language. In some cases, island groups are appended to mainland polygons, as can be seen here in the depiction of Danish (in the same manner, the Hebrides are mapped as Scottish-Gaelic speaking). Most often, however, islands and archipelagos are simply ignored, as one can see here in the cases of Norway’s Lofoten and Sweden’s Gotland and Olaand. Had Gotland been considered, I wonder whether it would have been mapped as Gutnish speaking. Gutnish, a disappearing dialect, is distinctive, and is sometimes said to be a direct descendent of ancient Gothic. 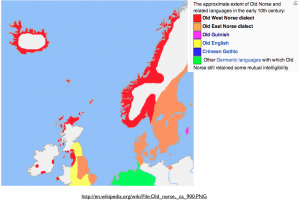 The mapping of Old Norse as coinciding with Iceland is also untenable. When Old Norse was spoken on Iceland it was also spoken in Norway, Sweden, Denmark, in northern Scotland, and pockets of the western British Isles.