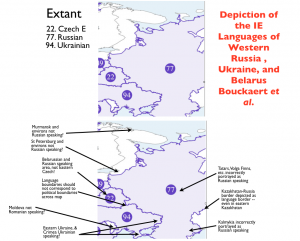 (Continued) The most glaring error in the linguistic map of western Russia and environs by Bouckaert et al. concerns the labeling of Belarus. The number “22,” placed in the center of the country, is listed as signifying the “Czech E,” which presumably means “eastern Czech.” As the authors have correspondingly appended the label “Byelorussian” to a small area in the eastern Czech Republic, the error is obviously one of transposition. Such mistakes can occur inadvertently, although the fact that it has gone undetected indicates a troubling failure to engage in routine proofreading.

A much deeper problem is indicated by the intentional mapping. Note how the polygons indicating the Belarusian and Ukrainian languages correspond precisely to the present-day territories of Belarus and Ukraine respectively. Such exact political-linguistic correspondence is rare, and when it is encountered it generally indicates a recent history of state-led linguistic repression or ethnic cleansing, which should be taken into account in any historical consideration of linguistic geography. In the case of Belarus and Ukraine, however, the current distribution of the national languages does not even come close to fitting precisely within the geographical bodies of the respective countries. 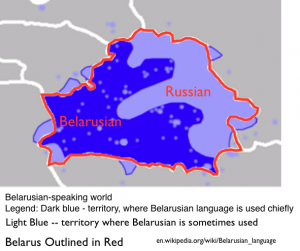 Belarusian is widely spoken in Belarus but it is not the country’s majority language and it is dominant only in the west and the south, as can be seen on the Wikipedia map posted here. Even in these areas, Belarusian is losing ground among the young, and is thus classified as a “threatened language.” The threat stems from Russian, which, according to the 2009 national census, is spoken at home by 72 percent of the people of Belarus. Identifying the Belarusian language with the national territory of Belarus is—yet again—a political rather than a linguistic statement. 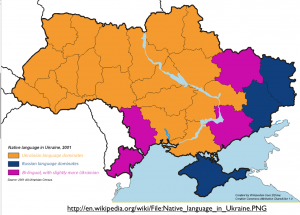 Placing the Ukrainian language precisely within the territorial bounds of Ukraine is an even more egregious error. The fact that eastern Ukraine and the Crimean Peninsula are mostly Russian-speaking areas is well known, as it is mentioned almost every time that Ukrainian elections are discussed. According to the Constitution of the Autonomous Republic Crimea, Russian rather than Ukrainian serves as the “language of interethnic communication”. Moreover, government duties in Crimea are fulfilled mainly in Russian, hence it is a de facto official language. The issue of whether Russian should be made co-official in other areas of Eastern and Southern Ukraine that 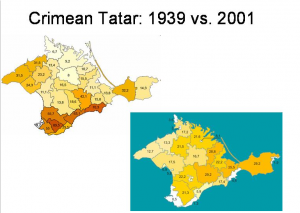 are already de facto Russian-speaking is hotly debated on the parliamentary level. Before WWII, moreover, the linguistic map of the region was far more complex than it is now, an observation that holds true for most of eastern and central Europe. The southern Crimea, for example, was then dominated by people speaking Crimean Tatar, a language in the Turkic family. 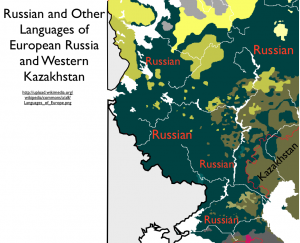 The depiction of European Russia is little better. In this case, political boundaries are not slavishly followed, as large areas of northern Russia are correctly shown as non-Russian speaking. But many northern regions that are Russian-speaking, such as Saint Petersburg, are oddly excluded from the realm. Conversely, sizable areas in eastern European Russia are mapped as Russian-speaking when in actuality they are inhabited by peoples speaking Uralic and Turkic languages. It is admittedly difficult to map such languages as (Volga) Tatar, Mari, and Udmurt, as they are not spoken in geographically contiguous areas but rather form archipelagos in a Russian sea. But do such technical challenges warrant the exclusion of such language? More than six million citizens of the Russian Federation speak Tatar as their first language, and mapping them as if they were Russian speakers fails to given them the recognition that they deserve. The Udmurt language, spoken by about half a million speakers, has been recently propelled to the focus of the public attention in Russia and in the rest of Europe when a band of Udmurt-speaking (and -singing) grandmothers won second place at the Eurovision Song Contest.

Such mapping difficulties are by no means limited to western Russia. In many parts of the Indo-European realm, languages are interspersed, forming complex amalgams. As mentioned above, such mixtures were much more intricate before the horrors of the Second World War and its immediate aftermath. Depicting such areas as linguistically uniform, as Bouckaert et al. routinely do, thus results in intrinsic distortions. Such distortions, moreover, seem to be a necessary feature of their basic methodology, as they depict every language within a discrete and uniform polygon. Linking together languages whose speakers are scattered in separate communities over large areas into single bounded spaces results in such absurdities as the gerrymandered Kurdistan mentioned in the previous post. 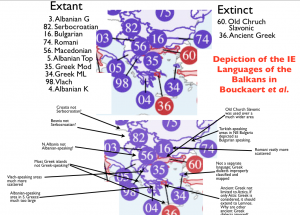 Such procrustean tendencies reach a laughable extreme in the depiction of the Romani language (that of the so-called Gypsies), seen on the map of the Balkans posted to the left. Romani, labeled 74, is impossible to locate precisely, as the area indicated is covered by the circle16 in western Bulgaria. Presumably, a small, discrete Romani polygon lies below this numerical tag. To restrict the Romani language to this area is beyond absurd. Romani, like the Roma people who (sometimes) speak it, is dispersed over most of Europe. Bouckaert et al., however, do not even manage to adequately locate the language’s center of gravity, as far more people speak Romani in Romania than in Bulgaria. Mapping Romani is, of course, an extraordinarily difficult task, as the linguistic community is not only scattered widely, but its members often relocate. As a result, most cartographers simply indicate the numbers and percentages of Romani speakers (or Roma people more generally) found in different countries. 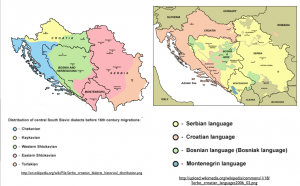 The rest of the map is not much better. Although the authors differentiate four separate Albanian languages, they depict the northern half of Albania as non-Albanian speaking. They also limit Serbo-Croatian to Serbia and Montenegro, excluding Croatia and Bosnia. Here the categories used and the map itself fail to correspond; what the map shows is the political-linguistic construct of Serbian (plus Montenegrin), used since the break-up of Yugoslavia, whereas the label turns back to the Yugoslavian idea of a single Serbo-Croatian languages, which also encompasses Bosnian and Croatian. From a linguistic standpoint, Serbo-Croatian works best, as all of its politically standardized forms are mutually intelligible to some degree. But by the same token, Bulgarian and 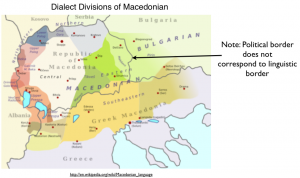 Macedonian, shown here as separate languages, are similarly interintelligible. The underlying problem here is the lack of uniformity in the treatment of different languages: if they have four Albanian languages as well as separate languages in Bulgaria and Macedonia, they should have separated Serbian, Croatian, Bosnian, and Montenegrin—or better still, they should have differentiated the non-political dialectal divisions of Serbo-Croatian: Chakavian, Kaykavian, Western Shtokavian, Eastern Shtokavian, and Torlakian. 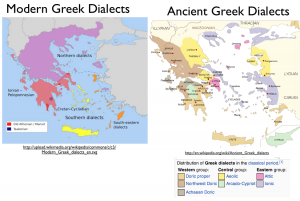 Finally, the mapping of Greek, both ancient and modern, is bizarrely idiosyncratic.  On what possible basis could the authors limit ancient Greek to Athens and its vicinity? The implicit argument here is that only Attic Greek was Greek, with the other Hellenic polities speaking non-Greek languages, a nonsensical idea. And yet they don’t even manage to map Attic Greek properly, leaving out the islands on which it was spoken. One can only conclude that the authors are incompetent at 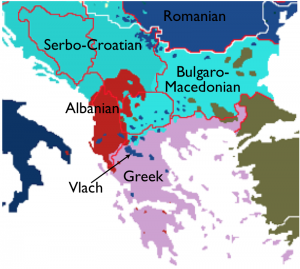 mapping languages, a cornerstone of their approach.