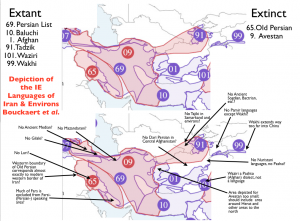 (Continued) Moving westward, the linguistic mapping of Iran and environs by Bouckaert et al. contains roughly the same density of error as that of South Asia. As most of these mistakes are noted in map call-outs, and others have been discussed in previous posts, I will focus here on the authors’ misperceptions about the Persian language. 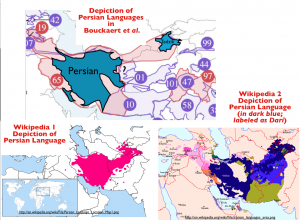 The authors have divided Persian into two languages, labeled “Persian List” and “Tadzik” (a non-standard spelling of “Tajik”). Linguists, however, generally agree that Persian is a single language, albeit one with ten or so dialects, three of which serve as standard literary forms. These three official varieties are labeled Western Persian (or Farsi), found primarily in Iran, Eastern Persian (or Dari), spoken mostly in central and northern Afghanistan, and Tajik Persian (or Tajiki), located in Tajikistan and Uzbekistan. One would have to take an extreme “splitting” position to regard Farsi and Tajik Persian as separate languages. As the Wikipedia notes, “Persian-speaking peoples of Iran, Afghanistan, and Tajikistan can understand one another with a relatively high degree of mutual intelligibility, give or take minor differences in vocabulary, pronunciation, and grammar—much in the same relationship as shared between British and American English.” (It is also significant that the Tajiks historically call their tongue Zabani Farsī). And if separating Farsi and Tajiki is problematic enough, ignoring Dari Persian, spoken by 15-18 million people, is absurd. Doing so sunders the geographically contiguous Persian zone into two widely separated language zones.* 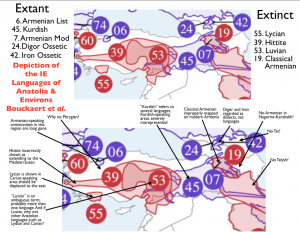 The most glaring blunder on the map of Anatolia and environs concerns the delineation of Kurdish. Here the main problem is the opposite of the one encountered in regard to Persian: several clearly separate languages are lumped together. By strictly linguistic criteria, Kurdish is a subfamily of related tongues. As the Wikipedia puts it, “Kurdish is not a unified standard language but a discursive construct of languages spoken by ethnic Kurds, referring to a group of speech varieties that are not necessarily mutually intelligible …” Kurdish proper is itself divided into two (or three) languages: Kurmanji, Sorani, and, sometimes, Kermanshahi. Philip G. Kreyenbroek, cited in the Wikipedia article referred to above, claims that, “From a linguistic or at least a grammatical point of view … Kurmanji and Sorani differ as much from each other as English and German.” The idea of a single Kurdish language is once again a political construct, albeit one based not on an actual political unit, but rather on the aspirations of most Kurdish people for a state rooted in trans-linguistic ethnic solidarity. 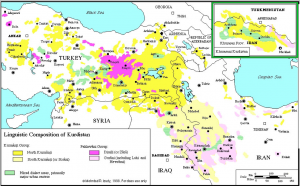 But not only do Bouckaert et al. elide the distinction between these two Kurdish languages, but they also subsume another language into the same category. The language in question is Zazaki (1.5-2.5 million speakers), located in the central part of eastern Turkey. The Zaza people are usually considered by others, and often by themselves, as members of the wider Kurdish ethnic formation, but their language is quite distinctive. It is most closely related to Gorani, spoken in Iran to the south of the Kurdish zone, but it also bears affinity with Talysh, another Iranian language ignored by Bouckaert et al. 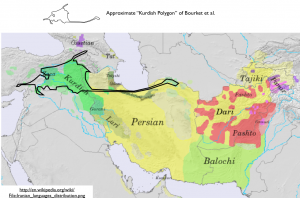 Not only are the Kurdish languages misclassified, but so too they are inaccurately mapped. The Kurdish polygon of Bouckaert et al. is truly peculiar, as it excludes the southern part of the Kurdish region (most of the Sorani-speaking zone) while including a western extension into mostly non-Kurdish-speaking areas. Its longer eastern “panhandle” pushes far enough to take in the Kurdish areas in northeastern Iran, but in the process includes non-Kurdish areas along the Caspian Sea and in the Alborz (Elburz) Mountains. Such a fanciful depiction brings to mind the infamous “Gerry-Mander” of U.S. political history. If 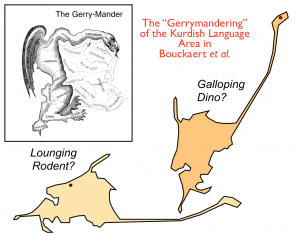 oriented conventionally, with north at the top, Bouckaert’s gerrymandered Kurdistan reminds me of a lounging rodent; if tilted on its side, it looks more like a galloping dinosaur. 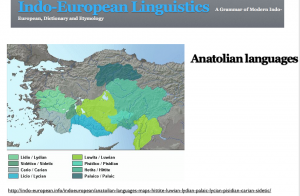 I have also posted an excellent map of the ancient Anatolian languages, which makes a nice contrast to the simplistic depiction of these tongues in Bouckaert et al.

*As a final note on this map, western Afghanistan, a mixed Dari- and Pashto-speaking area, seems to contain an unlabeled polygon for a modern Indo-European languages, which I have marked with a question mark.