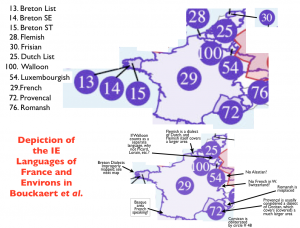 By now, all of the cartographic failings of Bouckaert et al. have become familiar. On the map of France and neighboring areas, for example, we see the unreasonable elevation of minor dialects to the status of discrete languages (three forms of Breton make the list), the replacement of a non-Indo-European language with an Indo-European languages (the Basque region is shown as French speaking), the improper use of political boundaries as linguistic boundaries (French is not shown as 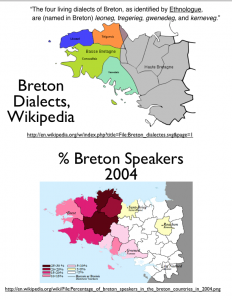 extending into Switzerland), the preferential classification of dialects as languages when they are associated with states (Walloon counts as a language, unlike the other equally distinctive langues d’oïl of northern France or the langues d’oc of southern France; Flemish counts as a language, unlike other equally distinctive forms of Dutch), and the simple geographical misplacement of languages (Romansh is placed in northwestern Italy rather than southern Switzerland). Of particular note in regard to the linguistic mapping of France is the fact that Corsica is completely obliterated by circle #48 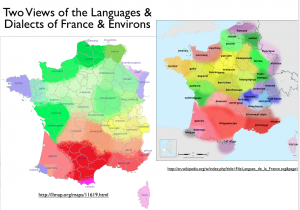 (see the map of the Italian Peninsula in the previous post). 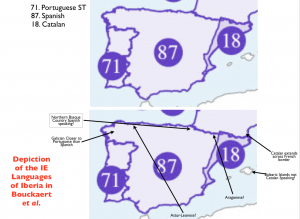 The mapping of the Iberian Peninsula is particularly simplistic. The authors have simply placed Portuguese in Portugal and Spanish, along with Catalan, in Spain. The fact that Galician in northwestern Spain is closer to Portuguese than to Spanish is ignored, and the Basque-speaking region is mapped as if it were Spanish 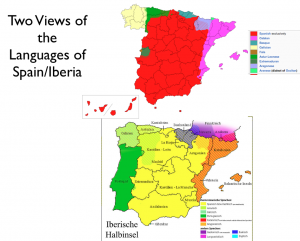 speaking. The Balearic Islands are also neglected, as archipelagoes generally are in the authors’ land-biased approach. 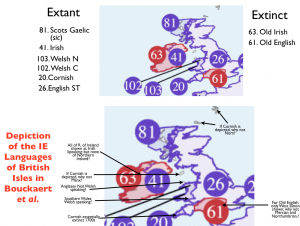 The map of the British Isles severely misconstrues the Celtic tongues. Irish, for example, is shown as extending across all of the Republic of Ireland and as entirely absent from Northern Ireland. In actuality, Irish has long been largely limited to the western margin of the island, and as late as the early 20th century was still spoken in parts of what was to become the political unit of Northern Ireland. The mapping here, in other words, is yet again political rather than linguistic. By the same token, Welsh is placed in the coal-mining districts of southern Wales where it has been absent for generations, just as Cornish is depicted in areas where it 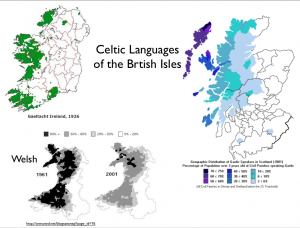 was not been spoken for hundreds of years. The mapping of Scottish Gaelic is not bad, but the term used—“Scots Gaelic”—is off the mark. The proper term is “Scottish Gaelic,” as “Scots” refers to a different language altogether. Scots, or Lowland Scots, is usually regarded as a highly distinctive form of English, but some linguists regard it as a language in its own right (CNN has recently reported on the demise of one of its dialects).* 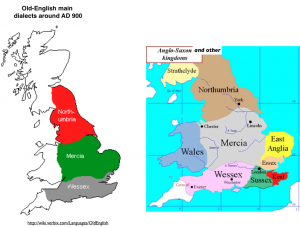 The mapping of extinct language is also poorly executed. Old English is essentially restricted to the historical kingdom of Wessex, even though the language extended as far north as the Edinburgh region of what is now southeastern Scotland, and included dialects of Kent, Mercia, and Northumbria. Significantly, even the Wessex (West Saxon) dialect of Old English extended farther to the east than what Bouckaert et al. would allow for Old English in its entirety.

The language map of Bouckaert et al. that I have criticized over these past five posts is a cornerstone of their model, yet it is also wholly inadequate for the task. Many of the errors found here ramify through all of the maps that they have produced.  But even if a serviceable map had been constructed, the model would still yield nonsense, as most of the assumptions upon which it is based are unwarranted, as we shall in more detail see in subsequent posts.

*Although I am no expert on this topic, I would argue that Lowland Scots is almost but not quite interintelligible with Standard English, especially in its spoken form, and thus deserves to be regarded as a separate language. Although I love the poetry of Robert Burns, I generally need translation. Take for example, these versus from “Auld Lang Syne”:

In the Original Scots:

We twa hae run about the braes,

and pu’d the gowans fine;

We twa hae paidl’d i’ the burn,

But seas between us braid hae roar’d

We two have run about the slopes,

and picked the daisies fine;

But we’ve wandered many a weary foot,

Since long long ago.

We two have paddled in the stream,

from morning sun till dinner time;

But seas between us broad have roared

since long long ago.

Or listen to the delightful poem “To a Mouse” on ScotsIndependent website:

O, what a panic’s in thy breastie!

I wad be laith to rin an’ chase thee,