Mapping the Global Distribution of Information at Oxford 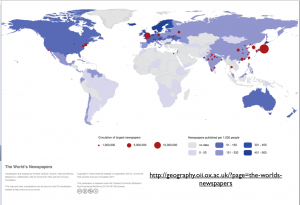 A variety of interesting and informative maps and other visualizations of global information flow can be found at the website called Information Geographies put out by the Oxford Internet Institute. The goal of the larger project is to:

[P]roduce a comprehensive atlas of contemporary information and Internet geographies, that will draw on four years of focused research conducted at the Oxford Internet Institute. Specifically, the atlas will draw on unique data, visualisations, and maps in order to tell a story about three key facets of global information geographies (access, information production, and information representation).

The next two or three GeoCurrents posts will examine several of the maps posted on the site. The first map to consider, that showing newspaper circulation, is perhaps the simplest and least innovative image found on Information Geographies. I have reposted it both here because I find the patterns that it shows quite interesting and because the map itself reveals a number of problems associated with mapping information. As the map indicates, newspaper circulation is one economic domain in which Japan still reigns supreme. I am also intrigued by the relative paucity of newspaper circulation in Latin America, and as well as by its importance in such countries as Ukraine, India, and Pakistan. The significance of London in the business is also noteworthy, as is the relative insignificance of most major U.S. cities 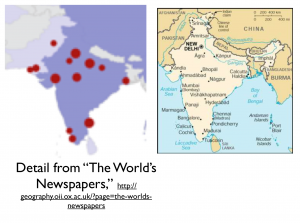 A close examination of the portrayal of India reveals both interesting features as well as problematic aspects of the map. The fact that Kerala in the southwest is marked with two circles despite its lack of major cities is revealing, as Kerala has long been noted for its high levels of education and its residents’ widespread interest in current affairs. The map’s most glaring oddity, on the other hand, is the fact that Mumbai (Bombay) is not shown as a major newspaper center, whereas much smaller and less important cities of northern and central India, such as Bhopal, are. But this depiction does not necessarily match information found on other sites. Consider, for example, the Wikipedia’s description of The Times of India, a Mumbai-based newspaper:

A circulation of 3.24 million should certainly earn Mumbai a place on the map based on this one newspaper only. Other Wikipedia articles, moreover, give different comparative figures, which only add further complications. According to one article, The Times of India is not even the largest-selling newspaper based in Mumbai. That position is rather occupied by Lokmat, described as “the fifth largest Indian daily … with 15.8 million copies a day.” If this figure is correct, Lokmat alone would earn Mumbai a ranking in the same category as that of Tokyo. But as it turns out, the “location” of Lokmat is somewhat ambiguous; although its “registered and corporate offices are located in Mumbai,” its “main administrative center is located in Nagpur,” another city missing from the map. Such a situation is not unusual in India; as noted on the Wikipedia article entitled “List of Newspapers in India by Readership,” many papers in India are situated in “various cities and states” (mostly because of their multiple, regional editions). Also of significance here is the distinction between circulation and readership; many newspapers in India rank much higher in the latter than in the former category, as individual copies are often passed around many readers.

However one tallies the impact of newspapers in India, it is clear that the business is thriving in the country, unlike in much of the rest if the world. As recently noted in LiveMint, “Western investors scoff at the idea of buying newspaper companies, assuming that with the rise of Internet, the newspaper is yesterday’s business model. However, circulation numbers in India continue to grow well, more so in the regional languages and it takes an understanding of the local context to bet against the pervasive bearishness about newspapers.” 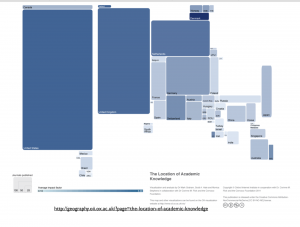 India does not figure nearly so prominently in another image produced by Oxford Internet Institute, this one measuring the “location of academic knowledge,” as measured by the location of the main offices of academic journals. As the authors describe the significance of this study:

This map reveals a staggering amount of inequality in the geography of the production of academic knowledge. The United States and the United Kingdom publish more indexed journals than the rest of the world combined. Western Europe, in particular Germany and the Netherlands, also scores relatively well. Most of the rest of the world then scarcely shows up in these rankings. One of the starkest contrasts is that Switzerland is represented at more than three times the size of the entire continent of Africa. The non-Western world is not only under-represented in these rankings, but also ranks poorly on average citation score measures. Despite the large number and diversity of journals in the United States and United Kingdom, those countries manage to maintain higher average impact scores than almost all other countries. It is important to note that the 9,500 journals included in this map are taken from the Web of Knowledge Journal Citation Reports (JCR) and do not represent the entirety of all published journals. However, given the influence of the JCR, and its claims to provide a “systematic, objective means to critically evaluate the world’s leading journals,” it remains crucial to understand the geography of academic knowledge.